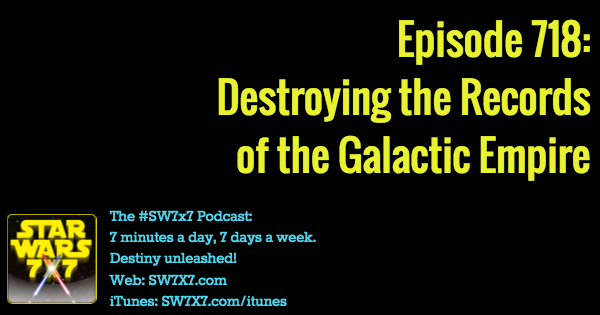 The Empire is a sore loser. They destroyed tons of records that could have been useful to the Republic for galactic restructuring. At least, that’s what we’re given to believe. But is it true?

Well, it sure seems like that’s the case. If the Empire morphed into the First Order (which it did), then why didn’t the First Order know where Luke was? Or where to find Jedi temples? There’s only one logical solution – they didn’t know, because they didn’t have the info.

This also exposes a blind spot in Supreme Leader Snoke. How can he be so ancient, and so Sith-y, that he wouldn’t just *know* of places where Luke could be hiding out, or the location to temples old and new?

Nope, it seems the Empire/First Order shot themselves in the foot without meaning to, by destroying the records intentionally, when they would eventually need those records for a greater purpose.

Which then, of course, develops into singing the praises of R2-D2. J.J. Abrams said Artoo was in a “coma,” and yet was able to hear BB-8 banging against him AND consider the question of the map. I keep thinking of Threepio whacking Artoo in the sandcrawler in “A New Hope,” telling him to wake up once they’ve stopped. It looks like Artoo can only accept “on” and “off” commands at that point, and can’t rationally discuss anything or process any information.

That doesn’t work for me. But Pablo Hidalgo in The Force Awakens Visual Dictionary describes it as a standby mode, a low-power mode wherein Artoo can defragment himself of nearly seven decades (seven!) of continuous operation.

What do you think? Did the Empire do the right thing in destroying their knowledge? Or was it a great thing for the fledging New Republic? Share your thoughts in the comments!

Today’s question: On what level of Maz Kanata’s castle does Rey find the lightsaber?