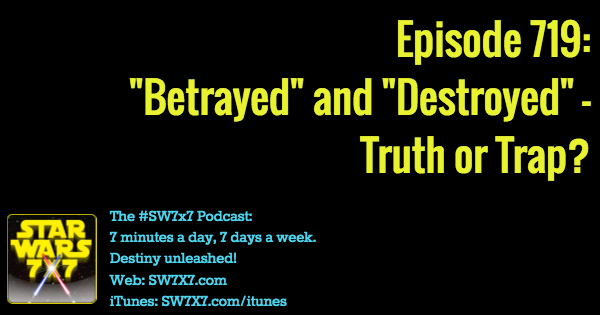 I’ve been thinking about Kylo Ren a lot in recent days, and about Luke, and what went down with the new Jedi.

Here’s what we know from the movie: One boy, an apprentice, ruined everything. In theory, that should be Ben Solo, aka Kylo Ren, and Han is being cagey about using Kylo/Ben’s name with Finn and Rey, whom he just met.

But here’s what the Visual Dictionary says about Kylo Ren: “Kylo Ren betrayed the other Jedi students studying with Master Luke Skywalker, and is responsible for their destruction.” Now, doesn’t that sound familiar? Like Obi-Wan Kenobi telling Luke that Vader betrayed and murdered Anakin Skywalker, and that once he did, the good man that Anakin had been was destroyed?

Those two words, “betrayed” and “destroyed,” have me wondering … it’s entirely possible that something else might have happened. Maybe Snoke swayed Kylo into giving him the location of the Jedi training center, and sent the other Knights of Ren to do the destroying. Maybe Kylo participated in it but was sickened or weakened by it, as he was when killed his dad, as the novelization suggests?

Today’s question: What’s Rey’s bright idea to defeat the Gauvian Death Gang and Kanjiklub while under the flooring on Han and Chewie’s freighter?