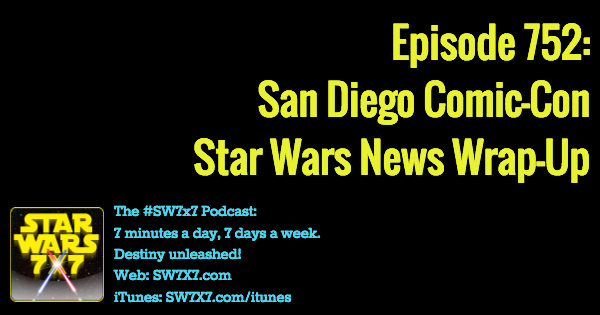 It was much more about Marvel than it was about Star Wars at this year’s San Diego Comic-Con.

Last year, there was a big Star Wars to-do, with Harrison Ford showing up, with the behind the scenes reel, and the evening concert. They were rebooting the fandom of Star Wars in a major way.

This year, there was a Lucasfilm Pavilion, where fans got to learn about a new character from Rogue One, Edrio Two Tubes. Here’s what the folks at Star Wars‘ Facebook Page had to say about him:

Edrio Two Tubes is a mercenary pilot who flies alongside his eggmate, Benthic. The two share the nickname derived from the breathing apparatus that allows their Tognath physiology to process oxygen atmospheres. Edrio’s home world Yar Togna was conquered and occupied by the Empire, forcing him to flee as a refugee. Desiring to strike back at the Empire, Edrio and Benthic have allied with Saw Gerrera.

In SDCC-adjacent news, we learned the names of two new creatures that had been pictured in the Rogue One footage from Star Wars Celebration Europe, Pao and Bistan. We also learned that Rian Johnson is right on schedule, as the official announcement came about the end of principal photography for Star Wars Episode VIII. That means Beardwatch 2016 can take a break, as Mark Hamill will likely shave his beard soon (if he hasn’t done it already). He might need it for (gasp!) reshoots in 2017, so we’ll have to keep an eye on him for a while longer. Not that we mind. He’s fun that way.

Meanwhile, if you think that new creature Bistan looks and acts a bit like Rocket Raccoon, let me know in the comments!

Today’s question: To what church do Lor San Tekka and his fellow Tuanal residents belong?