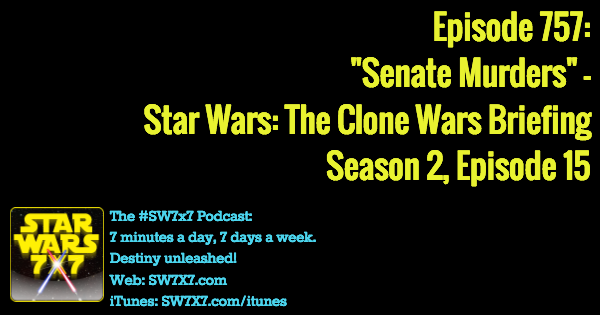 We’re back with the latest installment of the Clone Wars Briefing series! This time we’re covering “Senate Murders,” episode 15 in season 2. Bizarrely, this episode doesn’t actually take place during the events of season 2 – in fact, it takes place in the middle of season 3 for some reason. (Here’s the full episode rundown on Wookieepedia, from where the episode image comes as well.)

In brief: There’s a resolution in the Senate to increase clone trooper production. Padme and others are against it. One of those others is Onaconda Farr, a Rodian who suddenly dies mysteriously. Despite other likely suspects (including a nasty Kaminoan – and we find out that Kamino is not in the Republic, but used their clone production situation to wrangle a seat in the Senate), it turns out that Farr’s aide, Lolo, is the evildoer. Why? Anger over the dragging of Rodia into the war, for which Lolo blamed Onaconda.

Lolo tries to take Padme hostage to escape, but Padme delivers a knockout punch to Lolo, and all’s well that ends well. Except for the fact that the measure to increase clone production is ultimately approved. Whoops!

Yesterday’s answer: They were worth a half-portion each

Today’s question: Who’s the only person to get choked by Kylo Ren?