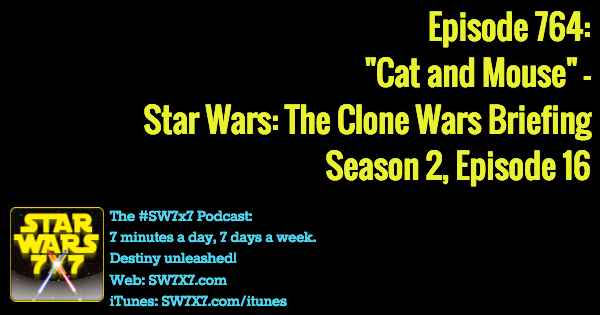 The Clone Wars Briefing is back for another update! This time, we’re looking at “Cat and Mouse,” season 2, episode 16 of the Clone Wars cartoon series.

Remember Captain Needa’s famous line from The Empire Strikes Back? “No ship that small has a cloaking device!” Well, a small ship with a cloaking device comes into play, since Bail Organa is trapped on Christophsis by the Separatists, under fire on the ground while a blockade in space prevents help from getting to him. The cloaked ship is intended to get past the blockade to deliver supplies to Bail on the surface. Then they put Anakin in charge of flying it, and surprise! Anakin deviates from the mission, and tries to take out the lead ship in the blockade.

It’s surmised that the ship (and the blockade) might be led by one Admiral Trench, due to the engagement tactics Admiral Yularen observes from the blockade. But Trench was supposed to be dead! Guess not. Anakin sees to that, however, which is a bit of a shame – when you introduce a villain who’s supposed to be a tactical genius, it’s a bit of a bummer to lose him within the same episode.

Long story shorter, Anakin punches a hole in the blockade, and then delivers the supplies to Bail Organa, much to Obi-Wan’s continuing and deepening chagrin. And all’s well that ends well.

What did you think about seeing a small cloaked ship? And if you were Obi-Wan, would you have had it with Anakin by now, and need a break from him? Have your say in the comments!

Today’s question: Where did the First Order project Finn and Poe’s damaged TIE fighter was headed?