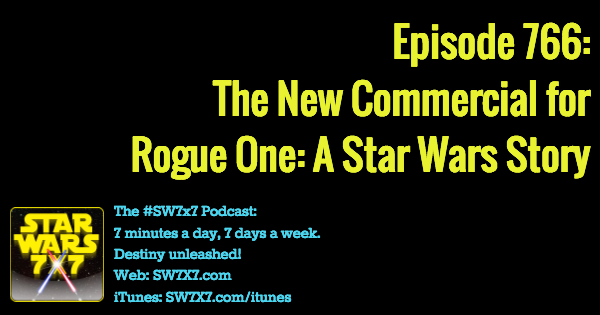 See the premiere of the new #RogueOne trailer during Olympic coverage this Thursday. pic.twitter.com/xkQIIvoYu3

Did you see it last week? A new Rogue One TV commercial, the first one of the promo campaign. It’s wicked exciting, of course, but before you get too excited, you should know that there’s no new footage or dialogue in the new commercial.

So, you may be asking yourself, is there anything new or different about it? Yes, there is a little something. The two posters to date include the tagline “A Rebellion Built on Hope.” The commercial includes a short variation on the tagline: “Hope Begins With Rebellion.”

Otherwise, here’s a shot-by-shot breakdown of the commercial – which, intriguingly, isn’t actually posted to the Star Wars YouTube channel, Facebook page, or Instagram account. If you’ve watched the Rogue One trailer and the behind-the-scenes video from Star Wars Celebration Europe, this will be very familiar to you:

Star Destroyer and dish being loaded into the Death Star.

Explosion in Jedha back alley courtyard seen from a window, then seen from the ground, with Stormtroopers caught in the blast.

Jyn in the Yavin IV command center: “This is a rebellion, isn’t it? I rebel.”

Jyn, Cassian Andor, and K-2SO running and being chased through Canary Wharf station.

Jyn, Cassian, and pilots walking out of Yavin temple.

Forest Whitaker as Saw Gerrera on Jedha in that circular tunnel.

Moisture vaporator on fire, with Death Troopers poking around.

Saw delivering the message, “If you continue to fight, what will YOU become?”

Exploding shuttle craft on Scarif, and Rebel trooper flinching and ducking for cover from the explosion.

Jyn in the TIE Pilot-y uniform.

The Rebel team running out onto the beach on Scarif, with AT-ACTs firing on them.

For the record, the first Force Awakens commercial wasn’t posted on the Star Wars YouTube channel, either – but also, the first TFA commercial wasn’t released until early November, and here we are, getting a Rogue One commercial three months earlier by comparison (though the trailer total is still 2 TFA trailers and a BTS video to 1 Rogue One trailer and a BTS video). What do you think this says (if anything) about the difference in Lucasfilm’s marketing strategy for the two movies? Have your say in the comments!

Yesterday’s answer: Poe says the jacket “suits him” (suits Finn, that is)

Today’s question: Can you name at least four Force powers used by Kylo Ren in The Force Awakens?