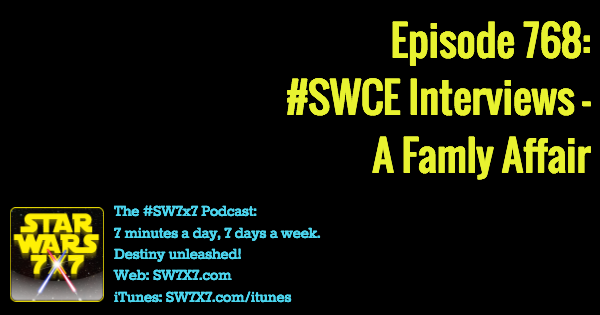 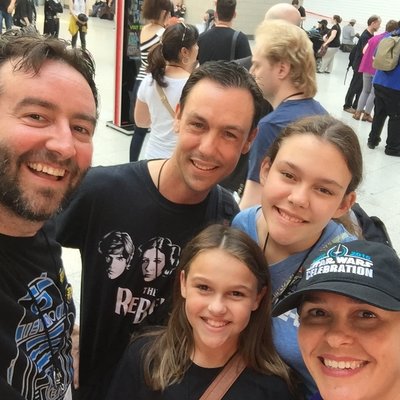 But this case was a bit different. I met Doug Howard at Celebration Anaheim last year. He was with a friend, I was flying solo. This year, we both brought our families – wife and two kids both – to Celebration Europe. While I was livestreaming on the last day, the Howard family happened to catch the stream, and based on the stuff they could see behind me, they were able to find me and I got to meet the whole family!

And when I asked if they would be game to be interviewed, well … you’ll have to have a listen to today’s episode to hear how differently the members of one family can answer the question about what’s most exciting about Star Wars right now.

And I want to hear from you, too! What’s most exciting to you about Star Wars right now? Rogue One, Rebels, Aftermath? Luke Skywalker, Rey, Ahsoka, Ezra? Norra Wexley, Doctor Aphra, someone else? Have your say in the comments!

Yesterday’s answer: Mind control, telekinesis. You could make a case for psychometry (when Rey touches the lightsaber and has the “Forceback” flashback, but LFL Story Group Executive Pablo Hidalgo thinks it was more of a vergence around the lightsaber.

Today’s question: There’s a statue outside of Maz Kanata’s castle – who is it a statue of?