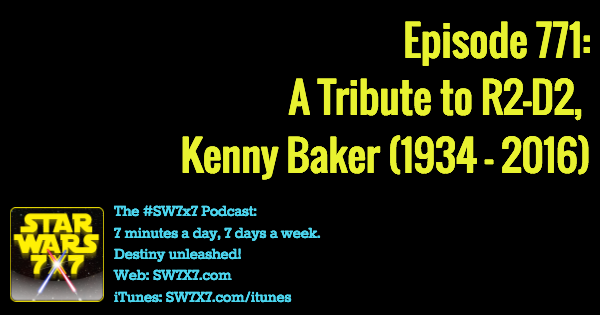 Sad news in the Star Wars galaxy today. Kenny Baker, the man behind (and inside) one of cinema’s most beloved characters, R2-D2, has passed away. He was 81 years young.

According to news reports, Kenny had been suffering from a respiratory condition for a number of years, which ultimately kept him from resuming the role of Artoo in The Force Awakens. He assumed the role of “Consultant” on the movie, providing insight into a role he had played in six previous films.

It isn’t easy to convey emotion an attitude when you’re stuck inside a tin can, but as George Lucas noted in a statement released on the official Star Wars website:

Kenny Baker was a real gentleman as well as an incredible trooper who always worked hard under difficult circumstances. A talented vaudevillian who could always make everybody laugh, Kenny was truly the heart and soul of R2-D2 and will be missed by all his fans and everyone who knew him.

Kenny, as Artoo, was the hero at the start of Star Wars, carrying the weight of the mission for the vital first part of the movie. Without the way Kenny conveyed stubbornness, loyalty, courage, fear, and determination, we as fans would never have invested ourselves in the movie and the story as much as we did.

I remember seeing The Phantom Menace in 1999, and though it was very cool to have it kick off with a young Obi-Wan Kenobi, it wasn’t really “Star Wars” until R2-D2 rolled into action and saved the day by getting power back to the deflector shields on Queen Amidala’s ship. I still get chills and well up just thinking about it. That was when it was real for me, and I knew that Star Wars was going to be part of my life again, and the joy was beyond containable. All thanks to the nuanced work of Kenny Baker, managing to deliver an emotional performance with serious limits on how to express it.

Goodbye Kenny Baker, and thank you.

In memory of Kenny Baker – the man inside R2-D2 – here is every time our favorite droid saved the day in #StarWars.https://t.co/ujk1aVQn2z