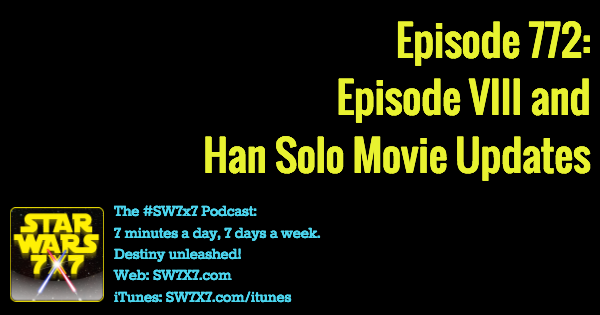 So yeah, everyone’s making a fuss about Rogue One right now, and why shouldn’t they? That was a heck of a trailer, wasn’t it?

But there are at least two other Star Wars movies being made right now. One’s in post-production, and one’s in pre-production. Those would be Episode VIII and the as-yet-untitled young Han Solo movie, respectively. There’s not a heck of a lot to report about them, as the veil of secrecy is only getting thicker now that Lucasfilm had The Force Awakens to teach them what they needed to learn about keeping things quiet in this new age.

There is one bit of news to which I only refer on the podcast, and you can decide whether you want to read more for yourself. It’s a rumor about Kelly Marie Tran’s character in Episode VIII.

In the meantime, let me know: Are you all about Rogue One? Or are you just biding your time and more focused on Episode VIII? Share your thoughts in the comments!

Today’s question: What does Poe say upon seeing the approaching swarm of TIE Fighters at Starkiller Base?