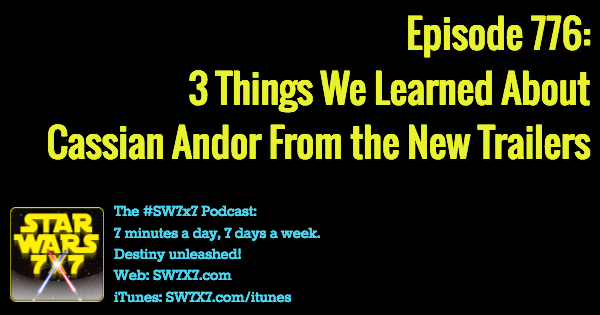 Yesterday, we discussed in the podcast three things we learned about Jyn Erso thanks to the new Rogue One trailers. But she wasn’t the only person who had a layer or two of mystery pulled back.

Cassian Andor, played by Diego Luna, had dialogue for the first time in the trailers, and as was previously noted by someone other than me, he’s speaking with his own English accent. (Not “English” as in “British” like all the Imperials, but “English” like the Rebels speak it – where it might not be their first language, in some cases.)

That dialogue revealed something new about him, but his actions spoke louder, and K-2SO may have spoken more clearly for him. Here are three heretofore undiscovered things we learned about Cassian Andor:

1. Cassian thinks of Jyn as a “friend.” No, I’m not trying to ship anything just yet. I mean that when K-2SO comes up to Jyn to declare that the “Captain” has told him (K2) that Jyn is a friend, Cassian could have said any number of things instead. He could have told K2 that she was still his prisoner, and that she needed to be off the shackles so as not to give away what they were doing. He could have told K2 any other ridiculous story, but no, it’s “friendship.” Does this mean that Cassian was recruiting her from the start? Which leads to the next question.

2. Cassian says he’s been recruiting for the Rebellion for a long time. Personally, when I hear that someone is in “intelligence,” I don’t imagine them trying to “turn” people all that often. I imagine more lone wolf-type situations, stealing information, getting in and out of hostile territory unharmed, that sort of thing. We’ve been hearing that K2 may be Cassian’s only friend in the Alliance until Jyn comes along.

3. Cassian’s a sharp pilot who’s cool under pressure. You saw that giant storm of sand and rocks, and the little U-wing flying through it like it was nothing. Cut to the inside of the cockpit, where Jyn is not in the co-pilot’s chair – she’s behind the cockpit, yelling out to Cassian to “Go, go, go!” And Cassian just casually lifts his hand up to grasp the hyperdrive handle and send them careering off into hyperspace. No quick motion, no scrabbling of hands, not even a look up at the direction in which the hyperdrive pull was located.

How about you? What was new that you learned? Share your thoughts in the comments!

Yesterday’s answer: He pounds the wound with his fist

Today’s question: How many times does Kylo Ren pound that laser blast wound? (Not the individual poundings – the first time, he hits himself three or four times in rapid succession, and I’m referring to that as one time pounding at it.)