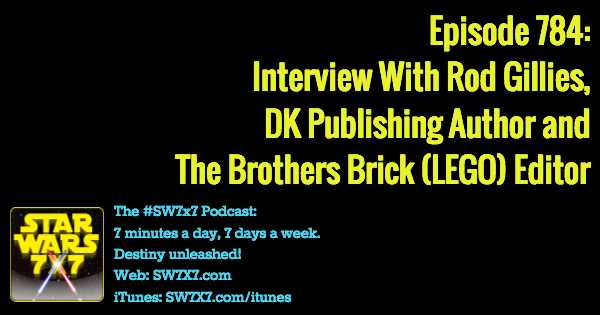 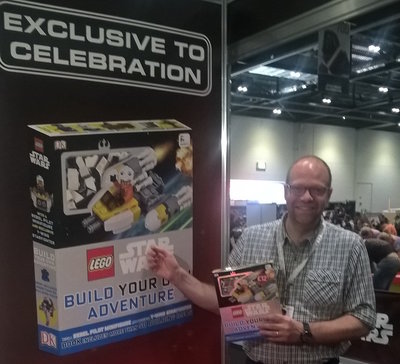 Did you dig LEGOs when you were a kid? I wasn’t as into them as obsessively as I liked my Star Wars toys – maybe because there weren’t LEGO Star Wars sets when I was a kid, but the regular space sets were pretty awesome. As an adult, I have a couple of LEGO Star Wars sets, including a ridiculously large Millennium Falcon, much smaller snowspeeders (Rebel and First Order), and Rey’s “Bumper.” And if I find myself in the local toy emporium, I’ll walk down the LEGO aisle to see what’s new and exciting.

Which is why it was cool to talk to Rod Gillies at Star Wars Celebration Europe. (That’s him, from his Twitter account, with his new book for DK Publishing, LEGO Star Wars: Build Your Own Adventure.) In addition to being an author for DK, he’s also an editor with The Brothers Brick, a popular stop for adult fans and collectors of LEGO. Not only did I learn a bunch about what LEGO collectors like in particular, I also got to talk with him about the fantastic idea behind the “Build Your Own Adventure” series – to get kids (and adults) to use the random LEGO pieces they already have to build cool new things, or to feel more free to break down the sets they already have to build, break down, and build again (and not treat them as one-time-only statues).

Today’s question: What brings a premature end to the lightsaber duel between Rey and Kylo Ren?