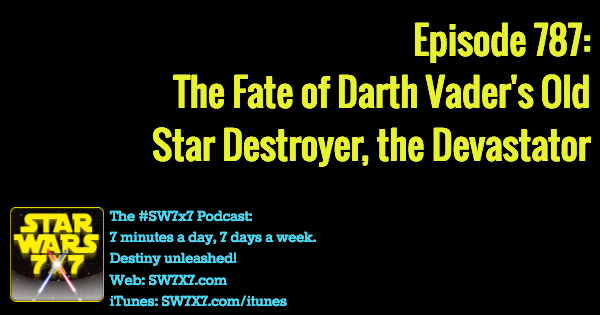 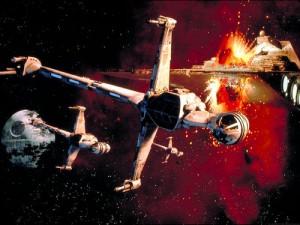 Does this image look familiar to you? It’s a bit of concept art from Return of the Jedi showing three B-wing fighters flying away from an exploding Star Destroyer. I think this may have been a bit of inspiration for “Blade Squadron,” the two-part short story that kicks off the new Star Wars fiction canon.

The stories were first published in Star Wars Insider magazine, issues #149 and #150, but they were later published on StarWars.com – here’s Part 1, and here’s Part 2. They tell the story of Blade Squadron, a B-wing fighter group initially tasked with rearguard duty during the Battle of Endor, protecting the fleet’s lines of communication. Ultimately, plans change when they arrive at Endor and find the shield still up around the Death Star and a host of Star Destroyers awaiting them.

Our primary hero, Gina Moonsong – smuggler-turned-Rebel with a disobedient streak in the vein of Han Solo – is part of the fighter group, and to make a short story shorter, Blade Squadron takes out the Devastator, which you may recall was Darth Vader’s original ride in A New Hope, before he shipped over to the Super Star Destroyer Executor.

The story is personal as well as professional. Blade Squadron’s Wing Commander Adon Fox lost his wife at the Battle of Hoth, when the Devastator shot down her fleeing transport. And Moonsong is not-so-secretly dating Lieutenant Braylen Stramm, Wing Leader in the squadron. Fox gets his revenge against the Devastator, and takes out their ace TIE Interceptor Pilot, Commander Gradd, in the process. (Too bad on the latter, since he could have made a good recurring villain.)

But it’s unclear whether Fox survives the encounter, as his ship is damaged and he can’t eject. Stramm, Moonsong, and the rest of Blade Squadron leave him behind to take on the Death Star, which is where the story ends.

There are two more Blade Squadron stories out there, so I imagine we’ll find out more about their fate very soon…

Today’s question: What duo can be seen hugging away from the celebrating crowd on D’Qar after the destruction of Starkiller Base?