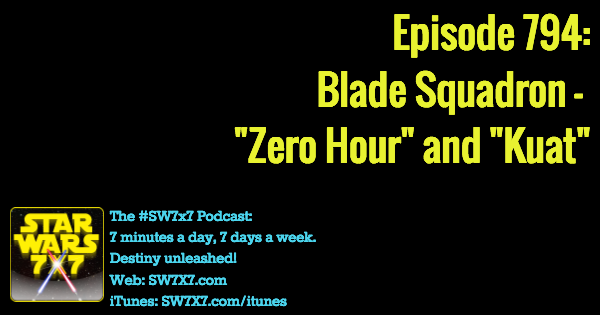 We’re back with another installment of our looks at Star Wars short fiction published in Star Wars Insider magazine! This time, we’re covering the other two Blade Squadron stories, “Zero Hour” and “Kuat.”

“Zero Hour ties into Chuck Wendig’s novel Star Wars: Aftermath, in which there’s a discussion amongst the Imperial Futures Council that devolves into name calling and shade throwing. The sore spot of Moff Pandion’s loss and ignominious escape from an attack on an Imperial communications hub on Malastare comes up, and “Zero Hour” tells the story of how that happened. In short: B-wings daringly blow it up, and our hero, Gina Moonsong, disobeys orders and blows up Pandion’s palace there as well.

Meanwhile, “Kuat” ties into Aftermath: Life Debt in its reference to the attack on the Kuat Drive Yards. We learn in the novel that it was a protracted battle, but in the short story, we see some of the engagements within the battle. The focus is more on character-building than it is on mapping out the whole battle, but we get some enjoyable pieces of the action, too.

And yes, Blade Squadron will be back in the beginning of 2017, in Star Wars Insider #171, tying into the final novel in Chuck Wendig’s trilogy. “Blade Squadron: Jakku” has something to do with Aftermath: Empire’s End, but we’re going to have to wait a while to get the scoop.

Today’s question: What two objects does FN-2199 throw to the ground before fighting Finn with a riot control baton?