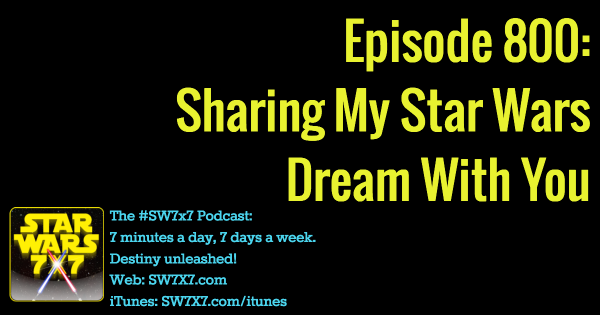 Welcome to another milestone episode! We’re at 800, and I’ve got a dream to share about Episode #1,000 on March 30, 2017 – to have 1,000 Patrons supporting the podcast by Episode #1,000. I’ll explain that further, but I have so much other stuff I want to share with you first, which is funny to write, considering I’ve already done 800 shows, so I’ve shared quite a lot! In fact, I’ve already published more episodes than any other Star Wars podcast, which is an astounding accomplishment, even to me.

If you’d told me back in April 2014 that I’d achieve that goal, on the one hand, I would have had a hard time believing it. On the other hand, the podcast was designed exactly so that I would be able to do it. I owe a huge debt of gratitude to my wife Lani, who helped develop the podcast, its structure, and its best ideas. She and the kids have been unendingly supportive, not just from the launch on 7/7/14, but even in the months before it.

April 2014 was very likely the genesis of the podcast – it all gets a little murky over time. A number of things started coming together, internally and externally. Lani and I had been talking about launching a podcast, and we’d joined a podcast mentoring group, run by a guy who does a daily business podcast. The kids and I were enjoying Star Wars Minute, a weekday podcast that runs six months out of the year, which spends 15 minutes or so analyzing one minute of a Star Wars movie. We were going to see Charles Ross do his one-man Star Wars Trilogy show on stage in Concord, NH. Lucasfilm announced the rebooting of the canon and the rebranding of the old Expanded Universe as “Legends,” which meant I had a chance at holding the whole Star Wars story in my head again.

And possibly the biggest thing was the release of the cast photo of the table read for the The Force Awakens. Up to that point, all we knew was casting rumors and that it would take place 30 years after Return of the Jedi. In January, Mark Hamill had said the only character he knew for sure was going to be in the movie was R2-D2. And the original scriptwriter, Michael Arndt, had left the project, which at that time was a nervous-making move. But suddenly, with that cast photo of the table read, it looked like everything was humming along, filming would start in May, and all was right with the world.

So Lani and I did all the brainstorming and got the tech in place, and I launched the Star Wars 7×7 Podcast on 7/7/14, which seemed superstitious in a good way – seventh movie, Star Wars debuting in ’77 when I turned 7, and so forth. And from the start, it’s been a one-man show. I know I say “we” a lot when I’m talking about the podcast, and unless I’m talking specifically about Lani, or about Quizmaster Joe or Scorekeeper Declan from our trivia episodes, the “we” is basically a weird verbal tic that I haven’t been able to shake over the years. It makes me feel a bit better than saying “I” this and “I” that, and making things all about me at times. Even though it is, in fact, just me behind the mic, and that’s exactly how I wanted it to be.

Not to say that I’m the only voice on the podcast. I’ve had the pleasure and honor to interview dozens of people about Star Wars – people from Lucasfilm itself, journalists covering the galaxy, authors of Star Wars books, fellow podcasters, you name it. Actors would be next on the list of my desired interviews – especially Daisy Ridley, John Boyega, Mark Hamill, and Carrie Fisher. But that will come in due time, I’m sure of it.

I’ve also covered three huge events since the start of the podcast – two Star Wars Celebrations, and the marathon leading up to the premiere of The Force Awakens. Not only have I done podcasts for them, but I’ve livestreamed video from all of them as well, and I’ve even livestreamed from possibly the most extreme Star Wars location so far – Skelling Michael, the island eight miles out in the Atlantic Ocean, where they filmed the final scenes of The Force Awakens (plus the beginning of Episode 8 as well). And probably owing to the fact that I’m running a daily podcast, I’ve often been the first to have podcasts published that provide breakdowns of the trailers released for The Force Awakens and Rogue One.

So, here’s where we get to the dream part of things. I’m going to keep doing this podcast, continuing and improving this one-man show. I’ve already got my ticket to Orlando, so you’ll be hearing coverage from me at Star Wars Celebration next year. But before that happens, I’m going to reach two more milestones. I’m going to reach half a million downloads of Star Wars 7×7 by the end of 2016, and I’m going to publish Episode #1,000, on March 30, 2017.

Right now, the only uncovered expense of the podcast is my time. I spend about two hours a day on the podcast (again, with immense gratitude for my family for making that kind of time possible).

Thanks to the 15 Patrons who support the podcast through Patreon.com, all of my tech and hosting costs are handled. And I’d like to take this opportunity to thank those 15 Patrons, many of whom have been Patrons since the beginning of the podcast:

Call it Star Wars 7×7’s 1K by 1K, if you will. I’m hoping to have those 1,000 Patrons pledge an average of $3.27 per month, which is less than $40 per year. (Of course, there are higher levels, and a lower one, too.) It may seem outrageous, jumping from 15 Patrons to 1,000. But there are podcasts and projects with much larger support on Patreon, so it’s not nearly as outrageous as it might initially seem.

If every person who’s downloaded the podcast pledged to support me on Patreon, I’d blow that modest 1,000-Patron dream away. So I don’t necessarily need everyone to do it. But I need YOU to do it. Please go to Patreon.com/sw7x7, and help me make that dream come true.

Like I said, I’ll keep doing this podcast regardless, because I love it, I’m passionate about doing it, and (surprise, surprise) I’m passionate about Star Wars. But if you think I deserve your support, and if you want to support one guy – one guy! – who’s managed to do 800 daily podcasts since July 2014, conducted dozens of Star Wars interviews, shared reviews and details on nearly every new piece of canon fiction that’s been released since the reboot, covered Star Wars Celebration events, broken down movie trailers in minute detail, and been your source for Star Wars news and insights for at least seven minutes a day, seven days a week, then you can help my dream of making this podcast pay my bills and support my family.

Also, as you’ve heard on the podcast, I’ve been doing Force Awakens trivia questions at the end of each episode for some time now. I’m going to be collecting them and publishing a trivia book in the near future. Anyone who becomes a patron at the $3.27 level or higher by March 30, 2017 will get a free digital copy of the trivia book sent to them.

Here’s what else you have to look forward to between now and Episode #1,000. I’ll be out and about for Force Friday, checking out the new Rogue One packaging to learn more about the new movie and characters. I’ll be reviewing the new Ahsoka novel in October, the Rogue One prequel novel Catalyst in November, and of course, providing full coverage of the Rogue One release in December. I’ll also continue our news coverage of developments on Episode VIII and the Han Solo movie, too.

The third season of Star Wars Rebels debuts later this month, and I’m going to jump ahead past season 2 and cover all of the new episodes as they come out. I’ll continue the Clone Wars Briefings, too – we’re about to wrap up season 2 and start season 3 soon – and because the short story coverage has been particular popular recently, I’ll continue that as well, along with check-ins on what you’ve missed about your favorite characters in the new comics.

It’s all happening, and I’m thrilled to be a Star Wars fan experiencing all of it and sharing the best of it with you. Thank you so much for listening to the podcast day in and day out, for all your kind words and positive reviews, and for saying “YES!” to supporting my dream by entering a pledge at Patreon.com/sw7x7.

May the Force Be With You,
Allen Voivod
Your Host, Star Wars 7×7