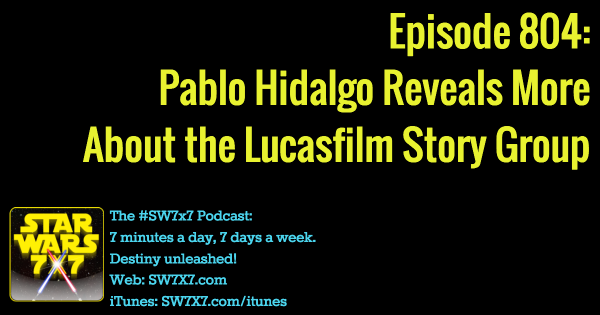 In today’s episode, we’re looking back on the last few episodes of The Star Wars Show, which has featured a pleasantly diverse array of content over the last four months. But in particular, I wanted to check out Pablo Hidalgo’s interview on yesterday’s episode, which featured (among other things) a discussion of what, exactly, is the deal with the Lucasfilm Story Group. He doesn’t give what I’d call a complete answer – he talks about creatives approaching Lucasfilm with ideas, and how they respond, but he doesn’t talk about ideas that the Story Group itself wants to see made.

Maybe, if we’re lucky (and I’ll let you know if we are), we’ll get a more complete answer in the extended interview Lucasfilm will be releasing later this week. In the meantime, check out the whole of this week’s Star Wars Show episode right here!

Today’s question: What planet do we see in The Force Awakens with a system of rings around it?