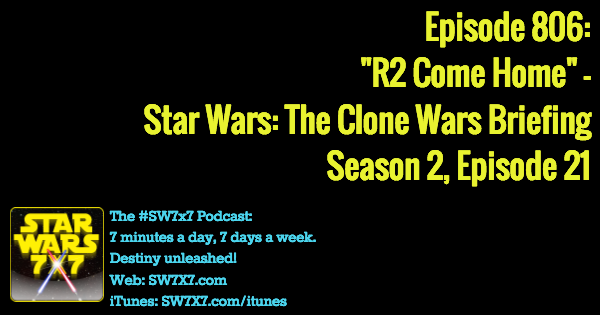 It’s time for another Clone Wars Briefing! Today we’re looking at “R2 Come Home,” Season 2, Episode 21 of the Star Wars TV series. (Here’s the full episode rundown from Wookieepedia, where the image comes from, too.)

In brief: Mace Windu and Anakin Skywalker are looking for survivors in the wreck of the Jedi cruiser from the previous episode. Little do they know that Boba Fett and Aurra Sing are still around, and have set a trap for them. They left Jango’s helmet on the bridge of the cruiser, with a bomb inside it. Anakin triggers it, burying them in wreckage from the blast.

From a safe vantage point, Aurra and Boba see the blast, and though Aurra thinks they’re done, Boba wants to see the body. They figure they can get paid by the Separatists for delivering proof of death, so they head for the cruiser. But R2-D2 manages to repel the boarders, first closing a blast door, them shoving a bunch of junk down the shaft that they’re climbing up, and finally dropping an explosive down the shaft.

Once that’s handled, R2’s orders are to call the Jedi Temple for help. But a gundark gets in his way, so he uses one of the Jedi starfighters to drag it away. Aurra and Boba see its crash, and go to investigate, while R2 tries to escape in Mace’s starfighter. He gets to a hyperspace ring in orbit and escapes, forcing Aurra to signal a retreat, with the three hostages they’ve captured in tow.

Artoo makes it to the temple on time, freaking out and going so fast that he falls down a flight of stairs and gets into a fight with another astromech. But he gets the message played, and Plo Koon and Ahsoka fly to the rescue with clone troops.

We’re headed for a final showdown in the next episode, which we’ll be covering tomorrow – you won’t have to wait until next week!

Today’s question: How many times does BB-8 find himself trapped in some kind of net in The Force Awakens?