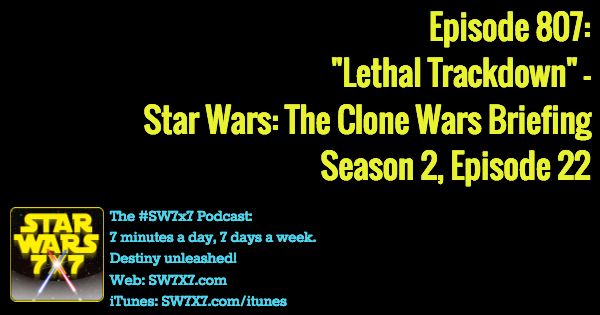 We’re wrapping up our Season 2 Clone Wars Briefings with “Lethal Trackdown,” Episode 22 of the Star Wars TV series. (Here’s the full episode rundown from Wookieepedia, from where the images is drawn as well.)

In brief: While Anakin and Mace recover from the events of the last episode, Aurra Sing sends a transmission showing that she has hostages, and tries to get Boba to kill one of them on the transmission. Boba can’t do it, which causes Aurra to scold him afterward. She, of course, had no problem executing the hostage.

So Plo Koon and Ahsoka go off to investigate and trace them to Florrum, where Aurra has set a trap for them. Florrum is the home of Hondo Ohnaka, noted smuggler, pirate, and Jedi confounder who we’ve met previously in the Clone Wars series. Turns out Hondo and Aurra used to be an item, but now they’re exes, and Hondo won’t get involved in the trouble Aurra’s got brewing. He even says as much to Plo and Ahsoka when they show up.

It all comes down to an old Western-style showdown, where Boba gets the drop on Plo, then Ahsoka gets the drop on Aurra, then chaos ensues. Plo uses a Force pull – not a push, a pull – to keep Boba from escaping. Aurra chooses to leave him behind, which hurts him badly. What’s the deal with their relationship? I don’t think I’ve seen any other precedent or antecedent for it.

Aurra steals a speeder and takes off, and Ahsoka steals another. A pirate raises a blaster rifle to shoot her down, but Hondo pushes the barrel down – he’s *really* not going to get involved, it seems, until Plo convinces Hondo to get Boba to reveal the location of the hostages.

Ahsoka gets there, makes super-quick work of Bossk, and frees the hostages. But then Aurra shows up, smashing her speeder into Ahsoka’s and using the explosive distraction to try to escape on Slave I. And in one of the best action-packed scenes, Ahsoka jumps onto the lifting-off ship, cuts one of its steering fins, and stabs her saber through the cockpit window. Aurra shoots at her through the window, blowing it out and causing Ahsoka to have to jump off and let it go.

But Ahsoka’s done enough damage to Slave I to make it fly out of control and crash over the horizon. It must survive, because we see it in Empire, which also means there’s a good chance Aurra survived the crash, too.

And then, the scene to which it’s all been building. Boba faces Mace, and tells Mace that he (Boba) will never forgive him (Mace) for killing his (Boba’s) dad. Mace, letting us all down, only coldly tells Boba that he’ll have to – forgive him, that is. No compassion, no attempt to steer him to the light, nothing. If the Clone Wars and the prequels are all about how the Jedi lost their way and failed the galaxy, this story is a little microcosm of that situation.

What did YOU think about Mace’s response to Boba? Share your thoughts in the comments!

Today’s question: What part of BB-8 gets damaged during Teedo’s attempt to capture it?