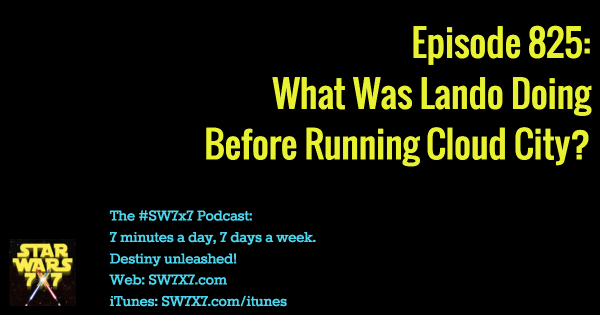 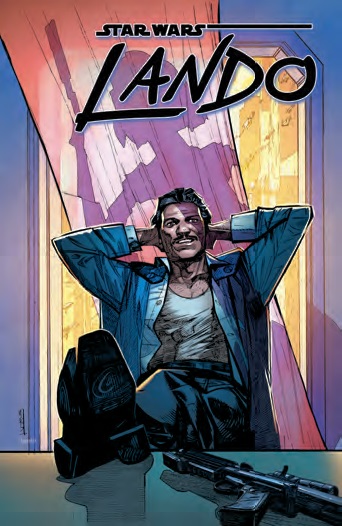 The previous two days on the podcast, we talked about what Princess Leia and Lando got up to immediately after the Battle of Yavin. As for everybody’s favorite “old smoothy,” Lando, we’re not totally positive…

And the reason is this. The Lando series doesn’t tell us exactly when it takes place, but there are a few things we can surmise. The opening title crawl doesn’t mention the destruction of the Death Star, which suggests it’s pre-BBY. Lando’s already lost the Falcon, and when we see him in Star Wars Rebels, he doesn’t have the Falcon. So it could be any time during or before the Rebels timeframe.

BUT … Lando is working with Lobot, and has been for a while. And Lobot hasn’t been in Rebels, as far as I know. So that suggests to me that this takes place sometime between Lando’s last Rebels appearance and the Battle of Yavin. (Got other ideas? Share in the comments!)

The story has a bunch of laugh-out-loud moments – likely helped along because of the image of Lando we’re all carrying around in our heads. Lando, pushed to pursue one last score to pay off a debt, is asked to steal an Imperial’s luxury yacht. Turns out, it belongs to Palpatine. (The scene where Mas Amedda has to break the news to Sheev is priceless.)

The gangster holding Lando’s debt just wants the ship, and says Lando can keep anything inside of it. It being Palpatine’s, it has a lot of nasty Sith artifacts in it, which ends up getting everybody except Lando and Lobot killed, though Lobot succumbs to the control of his implants and loses his own identity.

There’s more to share in the podcast itself – have a listen!

Today’s question: How many TIEs did Finn shoot down while Rey was flying the Falcon on Jakku?