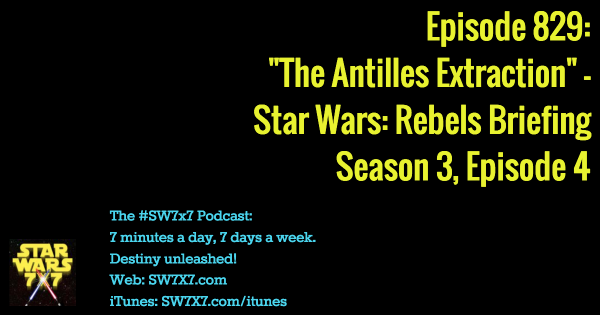 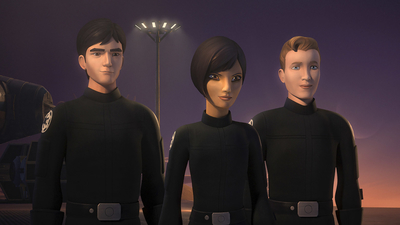 Thanks for joining me again for a Star Wars Rebels Briefing! This time, I’m looking at “The Antilles Extraction,” episode 4 of season 3 of the Star Wars TV series.

In brief: the rebels get word that some TIE fighter academy pilots want to defect, so Sabine goes undercover to help them defect. Easy peasy. (Full rundown on Wookieepedia, from where the image also comes – left to right, that’s Wedge, Sabine, and Hobbie.)

Some fun facts about the episode:

1. As alluded to above, Wedge wasn’t the only defector in this episode. Hobbie also came along for the ride – he of the “Two fighters against a Star Destroyer?” line from The Empire Strikes Back. Incidentally, the StarWars.com Databank entry on Hobbie says he defected along with Biggs, and makes no mention of defecting with Wedge. Looks like the Lucasfilm Story Group made need to tweak that entry to clean up the new continuity they’re establishing on this. (People behind the scenes lobbied for Biggs to be a part of this defection, but to no avail.)

2. The pilots came from Skystrike Academy, described in the Rebels Recon installment as a “Top Gun” type of academy for the best of the best.

3. Agent Kallus does Sabine and the defectors a solid, helping direct them to an escape route and sending a “We’re even” message with them for Zeb. But are they even? Well…

4. There’s a new Fulcrum on the scene, and we learn that it’s a name the rebels are giving to any agent supplying them with inside information. Seems like it would be hard to keep track of one Fulcrum versus another, but I’m sure they have a system worked out. Any chance that Agent Kallus has become a Fulcrum? I think so – the moral dilemma he was put in by the Empire, to exterminate the Lasat, is similar to the position that Wedge and Hobbie found themselves in prior to defecting.

5. Sabine was selected for the mission because she spent a lot of time in an Imperial academy. So did Ezra, but Sabine had been in an MIT-equivalent kind of thing on Mandalore, so a flight school would have been easy work for her. Additionally, we find out that there’s more going on with the Mandalorians and the Empire these days than meets the eye. It was already teased in the Season 3 trailer, and now we’re starting to see the first in-season hints about the big things waiting to go down later on.

Yesterday’s answer: The shields are part of the co-pilot’s controls on the other side of the cockpit

Today’s question: How many rathtars are Han and Chewie hauling on their freighter?