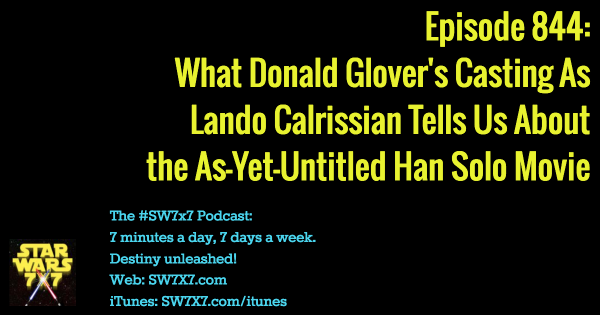 It’s official! After not answering the question of rumors about him being involved in the as-yet-untitled Han Solo movie coming in 2018, Donald Glover has been officially confirmed as the man to play young Lando Calrissian “in his formative years as a scoundrel on the rise in the galaxy’s underworld,” according to the official PR announcing his casting.

In today’s podcast, I bring you up to speed on Donald Glover as an actor and a rapper (yep, you read that right), and what his casting likely means for the tone of the movie. Hat tip to Bobby Roberts, podcaster emeritus from Full of Sith, who inspired my train of thought by suggesting on Twitter that the movie could be the equivalent of Smokey and the Bandit in space.

Learn more about the principals of the Han Solo movie right here:

The films of directors Phil Lord and Christopher Miller

Today’s question: What did Han tell Chewie to do with Rey and Finn, after they discovered Rey and Finn hiding on the Falcon?