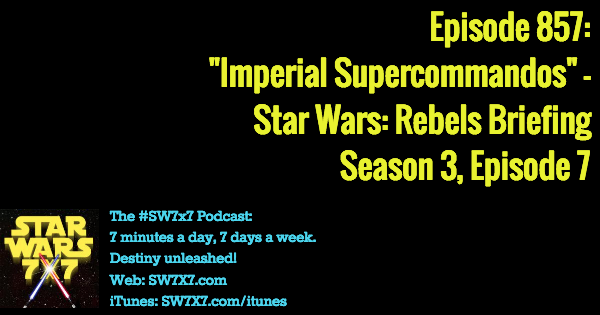 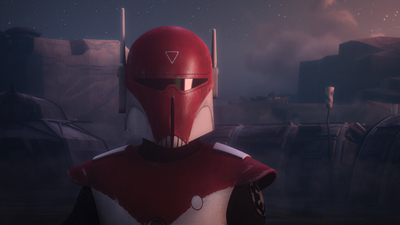 Welcome to another Star Wars Rebels Briefing! This time, I’m looking at “Imperial Supercommandos” from Season 3 of the TV series. I belong to the school of thought that counts the two-part season premiere, “Steps Into Shadow,” as episodes 1 and 2 of the season, making “Imperial Supercommandos” episode 7. You might, perhaps, consider this episode 5 or episode 6, depending on your own reckoning. (Here’s the full episode rundown on Wookieepedia, from where the episode image hails, as well.)

This episode is a bit of a sequel to “The Protector of Concord Dawn” from Season 2. Fenn Rau, said Protector, is still in Rebel custody, but when the Rebels lose contact with the base on Concord Dawn, they send Sabine, Ezra, Chopper, and Rau to investigate.

Rau double crosses our heroes on more than on occasion, but ultimately comes back to save them in their darkest hour. We get to see one of the fight scenes we saw way back in the Season 3 trailer, with Sabine rocking a jetpack and flying through canyons away from the Mandalorians who serve the Empire. And though Rau has resisted the idea of joining the Rebels, he comes away from this mission with a newfound respect for Sabine and how she hasn’t forgotten her Mandalorian heritage.

So, he asks if he can join the Rebels. Which I find utterly disingenuous, and I don’t trust him one bit. I think he may help in the short run, but I think he’ll sell the Rebels out if he has a chance to, and if it will benefit him or protect him (and, by close extension, Mandalore) from the Empire.

What do YOU think? Do you think Rau can be trusted? Do you feel like you understand Sabine’s Mandalorian backstory a little better as a result of this episode? Share your thoughts in the comments!