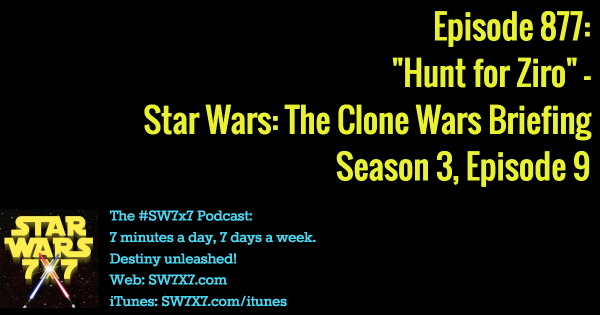 Praise the Force, Ziro the Hutt is dead! “Hunt for Ziro,” Season 3, Episode 9 of Clone Wars series, is thankfully and hopefully the end of the line as far as Ziro the Hutt appearances. (Fingers crossed that there won’t be any flashbacks with him!) Here’s the full episode rundown from Wookieepedia, from where the image also originates.

The episode has much more to recommend it than just the death of Ziro. It also features the introduction of the original cowboy Jedi, Quinlan Vos, and the Jedi talent of psychometry – being able to divine the circumstances surrounding an object. In this case, Vos is able to tell that Ziro the Hutt was on Nal Hutta despite the Hutt Council claiming he wasn’t, based on being able to randomly find and hold a cup that Ziro had used and tossed aside.

The Quinlan Vos/Obi-Wan Kenobi dynamic is great, too – very Oscar and Felix Odd-Couple-like. And the story has a lightness to it that seems to have been lacking from the third season so far. Not that the season hasn’t been interesting – more that it’s seemed a little heavier and more serious so far.

What did you think about this episode? Share your thoughts in the comments!

Today’s question: Who played Snap Wexley, Admiral Statura, and the stormtrooper who gets mind-controlled by Rey?