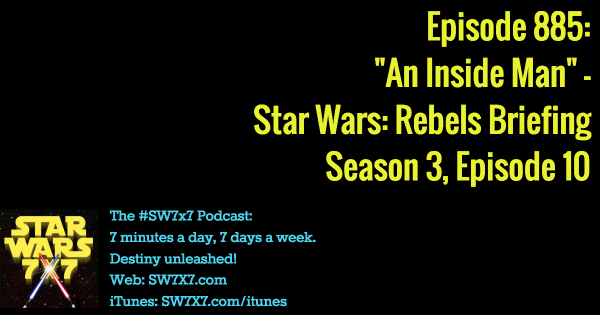 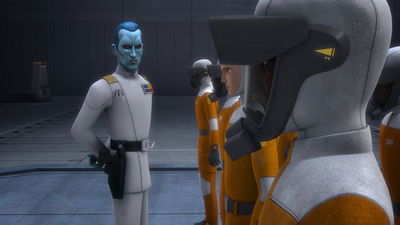 Well, I’m thrilled to be able to say that I called this one – it’s the biggest prediction I’ve gotten right so far. Back in my Rebels Briefing on “The Antilles Extraction,” I suggested that the new “Fulcrum” agent brought into the plot was none other than Agent Kallus.

Well, in this Rebels Briefing on “An Inside Man,” Season 3, Episode 10 of the Star Wars TV series, nearly two months later, Kallus is revealed as – well, if not “the” Fulcrum, then certainly another one of them. (Here’s the full episode rundown on Wookieepedia, from where the image comes as well.)

Thrawn is also piecing together our heroes’ connection to Lothal, and you get the idea that the plan he’s been formulating to crush this aspect of the Rebellion is coming together now.

Have a listen to the podcast and the Rebels Recon episode embedded below, and share your thoughts about the show in the comments!

Today’s question: What does Han says the first time he uses the bowcaster?

Previous Post: Episode 884: “Heroes on Both Sides” – Clone Wars Briefing, Season 3, Episode 10
Next Post: Episode 886: Rogue One and How the Definition of “Spoiler” Changes