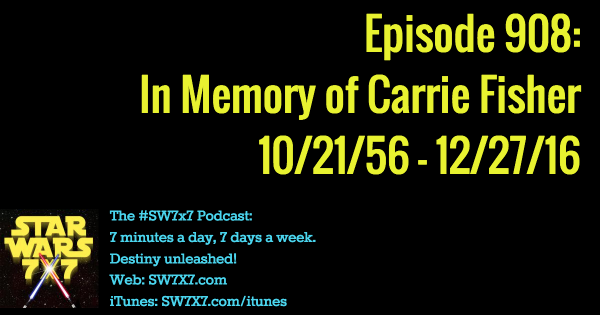 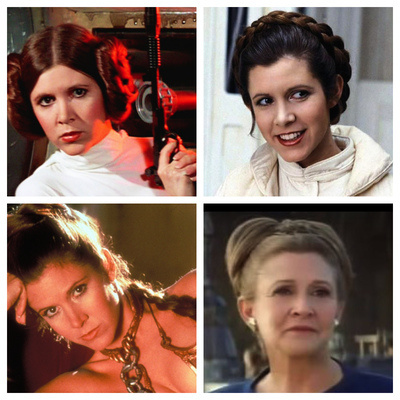 Princess. Senator. General. Icon. Leia Organa, the role model for kick-butt female movie characters, inspiration to writers, filmmakers, creatives, and humans of all genders, would be nothing to us without the woman who imbued this character with fierceness, fearlessness, deep intelligence, insight, a razor-sharp wit, and a keen sense of comedic timing.

Carrie Fisher – actor, writer, performer, advocate – passed away on December 27 at the too-young age of 60. She would have been too young no matter when it happened.

As reported worldwide and here on the podcast as well, Carrie suffered a cardiac event near the end of a flight from London to Los Angeles on Friday the 23rd. Eyewitness accounts claim she had CPR performed on her for as much as 25 minutes before she responded, whereupon she was rushed to UCLA Medical Center. Family reported that she was in stable condition in intensive care, but beyond that, no statements were given.

On Tuesday, a spokesperson for the family released this statement from Carrie’s daughter, Billie Lourd:

It is with a very deep sadness that Billie Lourd confirms that her beloved mother Carrie Fisher passed away at 8:55 this morning. She was loved by the world and she will be missed profoundly. Our entire family thanks you for your thoughts and prayers.

Carrie and I have been friends most of our adult lives. She was extremely smart; a talented actress, writer and comedienne with a very colorful personality that everyone loved. In Star Wars she was our great and powerful princess – feisty, wise and full of hope in a role that was more difficult than most people might think. My heart and prayers are with Billie, Debbie and all Carrie’s family, friends and fans. She will be missed by all.

In addition to more than 100 film and television credits as an actor, writer, and producer, Carrie was also an award-winning novelist, highly sought-after Hollywood script doctor, and star of her own acclaimed one-woman show on Broadway.

And though she’s passed on, we’ll still have at least one more chance to see her in a galaxy far, far away. Filming on Star Wars Episode VIII was completed in July, so we’ll get to see her in that iconic role one last time…