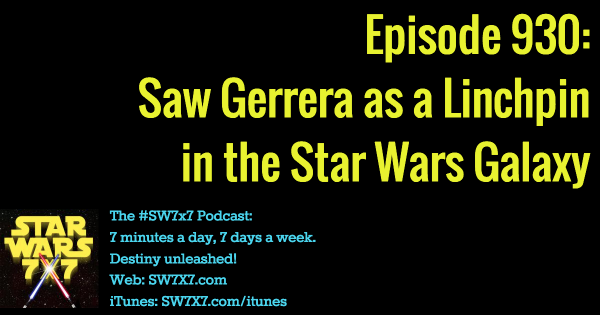 Saw Gerrera connects multiple Star Wars media (movies, TV shows, books) across multiple time periods (Clone Wars, Galactic Empire, rise of the Rebellion). In today’s episode, I’m looking at all the ways Saw connects through the new canon, and considering the possibility that we may have seen all we’re going to see of him in Season 3 of Star Wars Rebels. That being said, there’s also the knowing that something majorly bad has to happen to him between 2 BBY and 0 BBY to cause him to lose his legs – maybe that means we’ll see Saw back in Season 4? One can only hope!

Today’s question: What two types of stormtroopers appear in both the Original Trilogy and The Force Awakens?