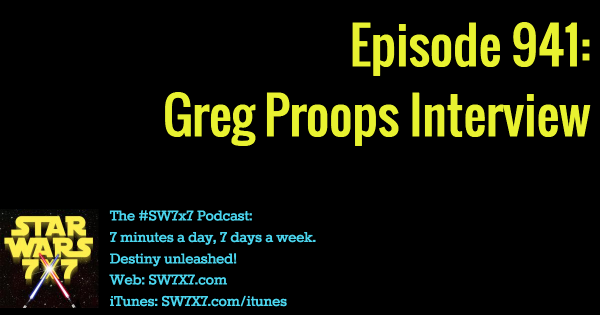 Think back to The Phantom Menace. Remember the podracing scene, and the two-headed announcer? The head speaking Galactic Basic (or English, if you prefer) was voiced by Greg Proops, host of the enormously popular Smartest Man in the World podcast, star of the improvisational comedy show Whose Line Is It Anyway?, stand-up comedian, and so on and so forth that you can learn about right here. (That’s him pictured, left, with Scott Capurro, who played the Huttese-speaking other head of the race announcer.)

I caught up with Greg at a podcast recording in Burlington, Vermont, and not only was he gracious enough to make time for an interview after his show, he also bought me a drink by way of apology. (He thought he’d kept me waiting too long.) We talked about movies and baseball off mic, but for the interview you’ll hear on today’s podcast, he tells the story of how he came to be in The Phantom Menace, and what the experience was like.

Brief language note: Although this is normally a family-friendly podcast, this one is marked “explicit” in the feed because you’ll hear a few words that are saltier than what you’d hear in a Star Wars movie. Fair warning if you’re listening with kids.

Today’s question: How many types of TIE Fighters did we see in The Force Awakens?