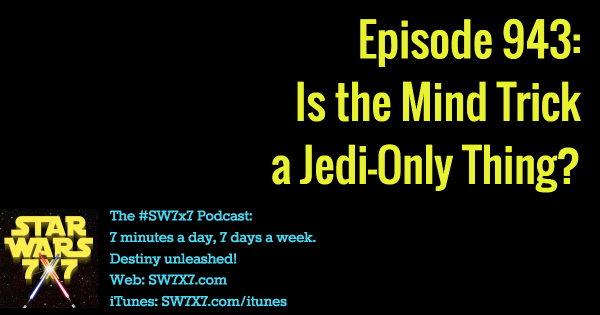 Scorekeeper Declan, out of the lear blue sky, asked me this question the other day: “Why doesn’t the Empire use the Jedi mind trick?”

Yes, he meant to say the Sith, and I made sure to set him straight. 🙂

But I thought it was an interesting thing for a nine year old to be thinking about in general, let alone those being the first words out of his mouth that morning after “Good morning, Dad.”

So I checked out Wookieepedia on the subject, and it turns out there have been a few dark side mind trick users, which is what I’ll be talking about on the podcast today.

I’m only covering the instances in the new canon, but if you know of other instances that happened in the Expanded Universe (or “Legends,” as it’s now called), please share some details in the comments!

Today’s question: What nickname does Han Solo give to Finn?