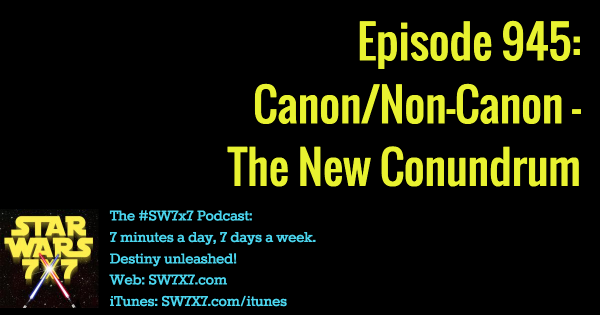 A couple days ago, the Star Wars Galaxy of Heroes mobile game announced that a Darth Nihilus event was coming to the app. If you don’t know who that is, that’s okay. Here’s the Wookieepedia background, it’s fascinating stuff.

The thing is, Nihilus is a Legends character. And considering that all media published after April 2014 were supposed to be official canon – including games! – this could have meant that Nihilus was making the jump back into canon status.

Turns out, not so much. There are a few Legends characters in the game already, and Pablo Hidalgo had this to say about it last year:

Galaxy of Heroes is free (and encouraged!) to pull from all of EA’s active Star Wars titles, be they Legends or Canon.

Now, Galaxy of Heroes has previously named and introduced new canon stuff to us – the Scarif Rebel Pathfinder, for example, or the TIE Reaper (the Death Trooper’s drop ship). But the fact that we’re also getting new (old) EU stuff introduced alongside the new stuff? Maybe it’s just me, but that feels we’re back on the slippery slope to the different hierarchies of canon that made everything so messy in the first place.

I’m sure it must get tiring for Pablo to be asked all the time, “Is this canon, is that canon,” ad infinitum. I’m sure some people are just nitpicky that way, but I think most people just want to know what story to believe in, to invest in. They’re not trying to look for errors or inconsistencies. They want to know and understand what it is that they’re embracing.

Otherwise, Star Wars becomes a bit like the results of a Bor Gullet messing with your brain. You’re not sure what’s history and what’s reality. But that’s my take. What’s yours? Share your thoughts in the comments!

Today’s question: How does Maz Kanata refer to Chewbacca?