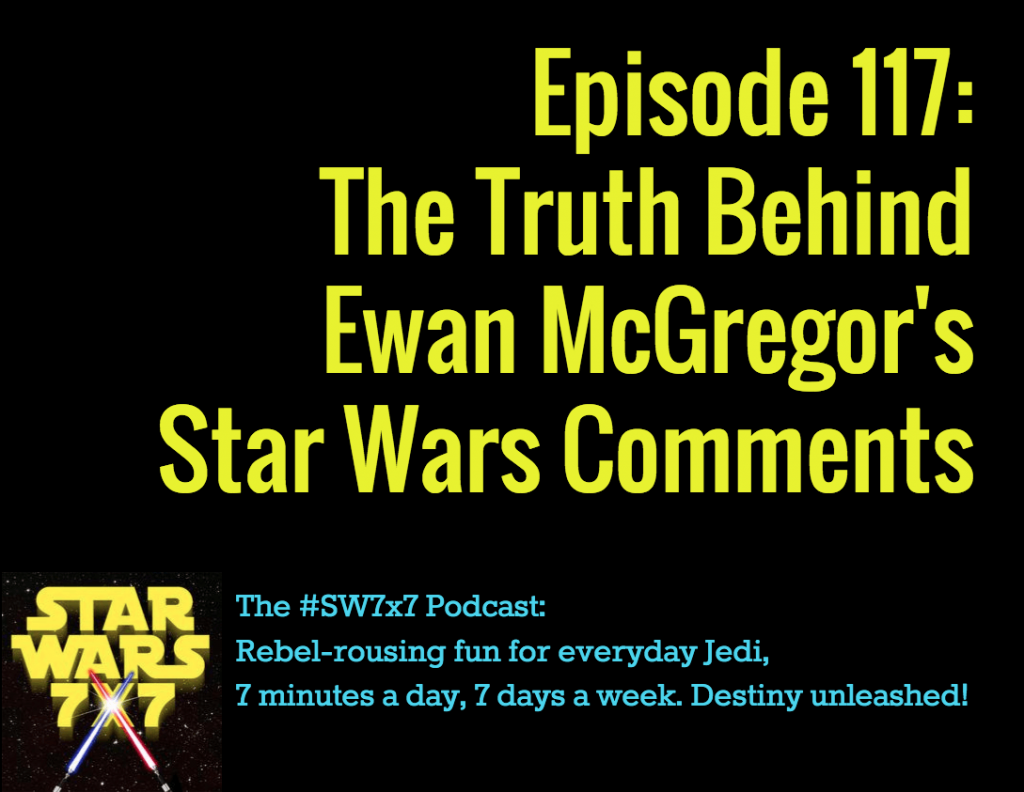 Normally I try to keep things upbeat and positive on here, and when I’ve got something to complain about, I’ll try to find the humor in it, or something positive within the issue I’m talking about, just so that the podcast doesn’t become a downer.

Finding the bright spot in what I’m abut to share with you, though, hasn’t been so automatic for me, and I’m hoping that, as we work through it together, the silver lining will be easy to find.

So this may have come across your radar on Facebook, or randomly seeing things on news or entertainment websites, but I’m seeing a ton of news stories claiming that Ewan McGregor is saying horrible things about Star Wars fans. Specifically…well, I can’t even say specifically, because this is a family friendly podcast, and we’d have to bleep out the two-word phrase he used.

But here’s the thing: It’s all being blown out of proportion. And what’s more, the longer it goes on, the worse it’s actually getting.

I’m posting a link to the Independent, a British publication, which was the straw that broke the camel’s back for me. Because it’s one thing to misquote or take things out of context to try to stir up a tempest in a teapot, but what the Independent did is so ridiculously, blatantly hypocritical, it makes me so angry on behalf of Ewan McGregor and Star Wars fans getting tarred with a false brush.

The headline is, “Ewan McGregor: Star Wars fans are ###### ######, I’ve seen Phantom Menace once,” and begins with, “Don’t expect Ewan McGregor to be walking the red carpet when Star Wars 7 arrives next year, he seems pretty pleased that the franchise is behind him.”

Sounds awful, right? Then, the article says, and I quote: “Because this isn’t one of those comments taken wildly out of context situations, here’s his exchange with Details this week verbatim.” I want you to remember that part, because here’s the quote they pull. Details asks, “Star Wars fans are notoriously intense. Have you had positive experiences with them?” and Ewan responds:

I don’t have any experience with them. I’ve never been to one of the conventions. The people I meet are the f*ckers who want me to sign Star Wars photos so they can sell them on the Internet or the people at premieres who are crushing children against barriers to get me to sign their f*cking picture of Obi-Wan Kenobi. They’re not fans—they’re parasitical lowlifes and ###### #######.

Catch that? He’s not talking about actual Star Wars fans, and he makes that crystal clear. So when the Independent runs a headline that says, Ewan McGregor: “Star Wars fans are ##### #####,” and you read what I just read, doesn’t that make your blood boil? And for them to have the gall to say this isn’t taken out of context, but the headline ABSOLUTELY takes it out of context, and even COMPLETELY misrepresents his comments.

Now, here’s the other question Details asks: “In almost every online ranking of Star Wars movies, Phantom Menace is rated as the worst. Do you defend the movie or agree with people who think it’s a piece of crap?” And his response:

I watched it once, at the premiere, so I’m not in a good position to judge. They had a tall order, the three films I did. The fans waited so long and wanted to feel like they did when they watched the first film, but they were grown-ups by that time. I don’t mind the criticism. I’ve heard it to my face.

Does that sound like a man who’s happy to have the movies behind him? No! That sounds like a well-measured, diplomatic, and utterly understanding response. It’s practically demonstrates compassion for the fans who were disappointed by the prequels.

Meanwhile, I can’t tell you how many interviews with various actors I’ve read or watched, where they say they hate watching themselves in their own movies. You’ve probably heard that before, right?

And anyway, more to the point, he’s already said he’s interested in doing more Star Wars movies! Particularly in the time period between Revenge of the Sith and A New Hope. We’ve got that quote linked at the blog post for proof, video and everything. “Could be quite exciting,” he says. “I’d be up for it, for sure, of course.”

So as far as the Independent goes, they’ve lost my readership, and if you don’t support this kind of misleading nonsense, I hope you’ll ditch them, too.

Surprising or little known Star Wars tidbits, sometimes related to today’s Force Feature.
Did you know? In a recent interview with Details magazine, Ewan McGregor admits that he did “party very hard” during the filming of the prequels, “wherever I was, whenever I was.” And he also says, “It wasn’t Star Wars‘ fault.” In fact, this interview is at the center of a storm of ridiculousness right now, which is the subject of our Force Feature today.

The Empire Strikes Back Mug – click the pic for details!

Today’s question: Submitted by one of our Patrons, Kevin Skarritt: In what Hollywood movie did we FIRST hear the quote, “Punch it, Chewie”?