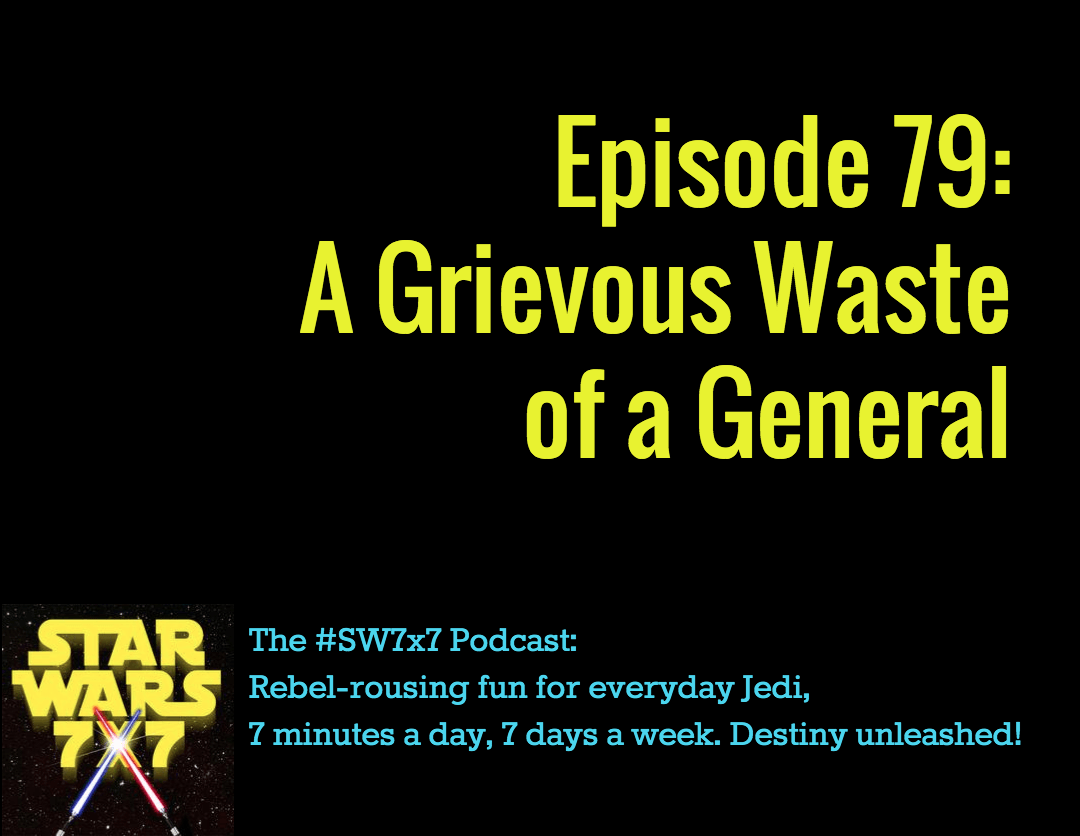 So according to George Lucas, he was thinking in terms of sidekicks for the bad guys for all of the prequels. So Darth Maul was the sidekick for Phantom Menace, Count Dooku for Attack of the Clones, and then they had to come up with someone – or something – else for Revenge of the Sith.

Thus, the art department was tasked to come up with a leader of the Trade Federation army, which is how General Grievous came to be.

After dozens and dozens of failed attempts, they hit on the idea that Lucas loved, which was to portray this leader as a cyborg. Now, that makes him similar to Darth Vader, in that they’re the only cyborgs of note in the Star Wars movies. To hear Lucas tell it, that may or may not have been intentional. He talks about how Grievous’ cyborg nature echoes what will happen to Anakin later in the film, but when you watch the Creating General Grievous mini documentary, it sounds like that’s just a happy accident, considering how the art department went through so many sketches of ideas of what Grievous could look like.

And incidentally, the IG-100 MagnaGuards were conceived as possible versions of Grievous in the initial design drafts that Lucas reviewed. Another happy accident!

As for Grievous’ signature cough, which I seem to recall being talked about as something cool and different for a cyborg back in the day –and so what, he coughs, that’s supposed to be cool? – supposedly he got that (or had it made worse) right before Revenge of the Sith started. The powers that be made up the story of Mace Windu delivering a Force-crush that cramped his internal organs and damaged his lungs during the kidnapping of Chancellor Palpatine on Coruscant. This is not, technically, the definition of retconning, which for those of you not familiar with the term refers to the changing of previous timeline history to make it match up with present events. But sometimes it does seem like that’s all they’ve been doing all these years, is making up stories to explain some otherwise arbitrary decisions.

So I think the General Grievous launch strategy – if there actually was a strategy, per se – was inspired by Boba Fett. Just like Boba was first introduced to fans in a cartoon on the Star Wars Holiday Special, Grievous was introduced during a cartoon – the very first Clone Wars series, from Genndy Tartakovsky, that ran from November 2003 to March 2005.

Then in the subsequent movie – Empire for Boba Fett, Sith for Grievous – you barely see either of them, they have a handful of lines, and yet they manage to become fan favorites, even though they’re quickly defeated (though on slightly different timetables). The parallel is yet another happy accident.

Which is terrific, and I’m super grateful for happy accidents But this whole sidekick thing, well, I’m not really a fan of it. If General Grievous was conceived to be just an evil sidekick, then it makes sense from the story department perspective why Grievous would be disposable, and easily disposed of. He was just a means to an end, only there to advance the plot. Which is really too bad, because it cheats us as an audience. We deserve to have characters that aren’t just there for mechanical purposes. And in just the two scenes we get with him, he does make for a wicked cool villain. But he suffers from a particular quirk of Lucas storytelling, which is to give you a brief sketch of a character’s background, and then step out of the way to let the fanbase obsess over it.

If you want to get deeper into Grievous, check out the Dave Filoni Clone Wars cartoons, which are, in fact, canon. He’s anything but disposable in those, and even though Lucas has given Filoni and his team the same creative license that they used to give to the Expanded Universe, it sure seems like you’ll be able to rely upon that version of the story for the long haul.

Did you know? According to Wookieepedia, “the same droids and techniques used to rebuild Grievous would later be used to apply Darth Vader’s cybernetic suit.” Now, did they really have to make those two items into a linked story? Methinks not!

“No Place to Hide” Boba Fett T-shirt – click the pic for details!

Today’s question: Who joined up with Leia, Lando, Chewie, and C-3PO as they were on their way to intercept Boba Fett’s ship?