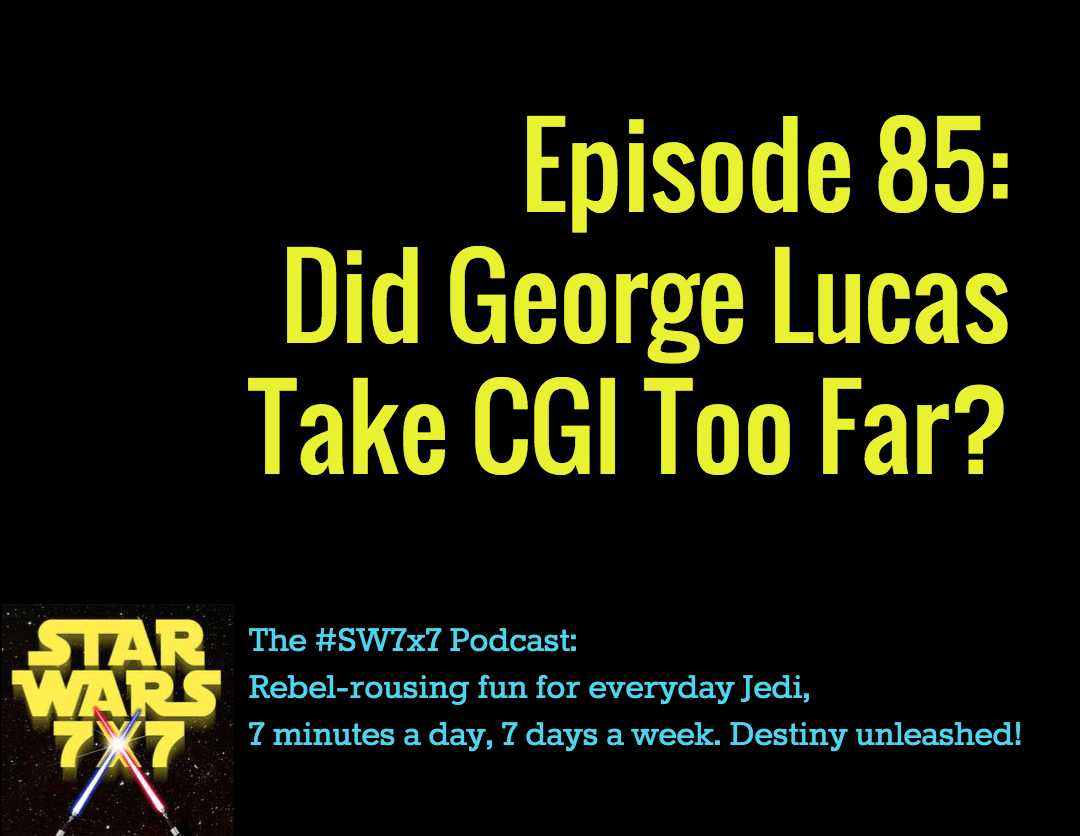 Everybody’s bound to have an opinion about this, but I’m the one with the microphone here, so I’ll start it off, and you can turn this into the conversation it’s meant to be at Facebook.com/sw7x7.

Let’s start with what we know, which is that George Lucas was never satisfied with the Original Trilogy movies. Just like Prince’s mother, right? You know, When Doves Cry, old Prince song? Anyway…

Never satisfied. Until the technology advanced far enough for him to do the things on screen that he’d visualized doing. Which, unfortunately, included getting Han to step on Jabba’s tail, showing a Wampa eating a bloody carcass, and changing the cast member playing Anakin’s Force ghost. So it was totally worth it.

Then yes, Lucas only decided to make the prequel trilogy once the technology had progressed to satisfy him, and that he saw there was a market for it. Specifically, from the Wikipedia entry that summarizes content from Michael Kaminski’s The Secret History of Star Wars:

After losing much of his fortune in a divorce settlement in 1987, George Lucas had no desire to return to Star Wars and had unofficially canceled his sequel trilogy by the time of Return of the Jedi. Because Lucas had developed most of the backstory, the idea of prequels continued to fascinate him. In the early 1990s, Star Wars saw a resurgence in popularity in the wake of Dark Horse’s comic line and Timothy Zahn’s trilogy of novels. Lucas saw there was still a large audience for his idea of a prequel trilogy and with the development of special effects generated with computer-generated imagery (CGI), Lucas considered returning to his saga and directing the film.

So I think we would all agree, whether it’s Star Wars or any other movie, that the story has to drive everything. The story is the vision, the brand, the emotional connection with the audience. I’m fine with him wanting to be sure that there was a market for it. That’s a smart business decision to make. But even with a story and a market – which are the only two conditions he needed to meet in order to make the prequel trilogy successful – he still wouldn’t have made the next set of films.

I’d argue that things like the script and the casting would fall under “story,” and that the story and the vision would guide the script and the casting choices. But I think that Lucas was too wrapped up in the digital effects in his own mind to give enough attention to where it was needed. For his purposes, see, the story had already practically told itself, and now it just came down to him being able to dress it up with the CGI toys any way he wanted to.

Instead, it seems as if Lucas wanted most, if not every, scene to have CGI, and so the story had to warp to accommodate CGI. It should be the other way around, that there should be a story-driven reason to use any CGI.

That said, when I hear that Star Wars: Episode VII is relying much more on practical effects, on the one hand, I get really excited, because it’s the kind of thing that will make the new Star Wars movies feel much more tangible and realistic. And technological advances will only have made the practical effects better than they were for the first trilogy. And if it weren’t for the first two new Star Trek movies, I’d have a concern that they were throwing the baby out with the bathwater, so to speak. Because CGI does have a place in all of this, and one of the many reasons it’s exciting to have J.J. Abrams as the director for Episode VII is the fact that Abrams will always put the story first.

We’ll ask you one more time before we go – what’s your take on any or all of this? Chime in at Facebook.com/SW7x7!

Did you know? Darth Bane, the Sith Lord that established the Rule of Two a thousand years before the Clone Wars, appeared as a specter in the Star Wars: The Clone Wars cartoon, and he was voiced by none other than Mark Hamill! Yes, he’s an accomplished voice actor now, but I never would have pictured him playing a dark side character!

Today’s question: How many times did Leia kiss Han in “The Empire Strikes Back“?

Previous Post: 84: Behind the Scenes and On the Road!
Next Post: 86: Obi-Wan Kenobi Gets Better With Age