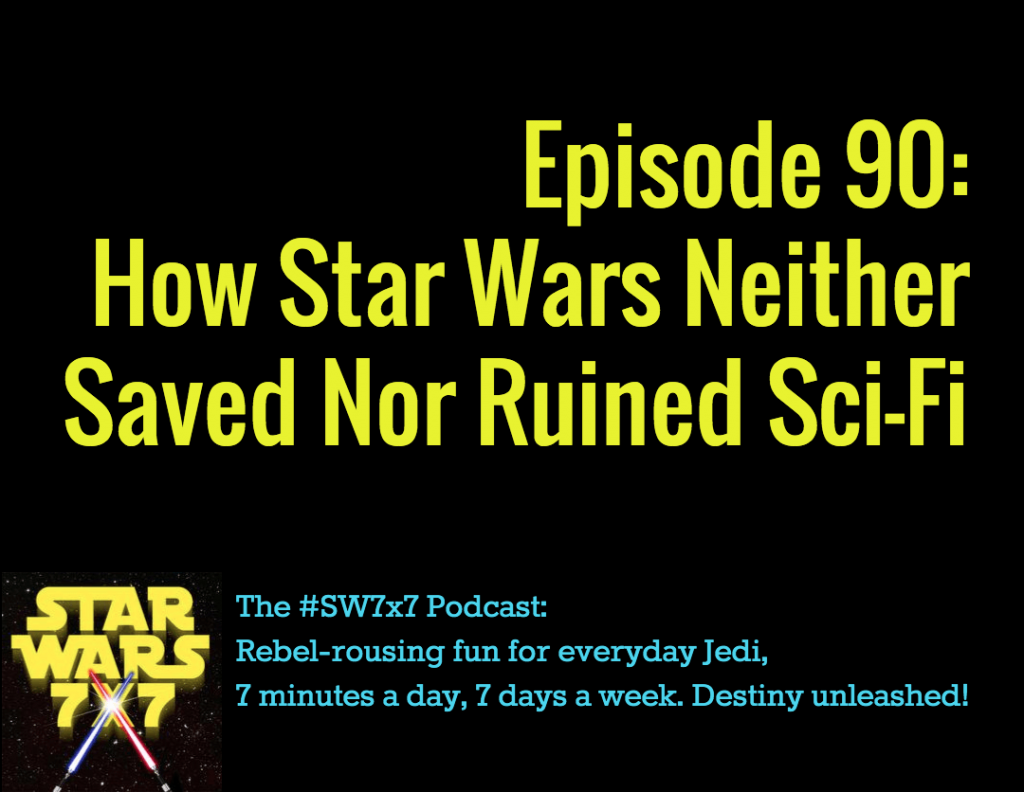 With some idle time on my hands between appointments, I popped open the browser on my phone and typed “Star Wars” in for a Google search, to see what would pop up. When news and rumors are breaking, that tends to fill up the results pretty quickly. But it’s been a slow week so far, so some of the deeper results seem to be floating to the surface.

And one of them was an opinion piece from May of this year about how Star Wars ruined science fiction as we know it. On a major cable news website. And I knew it would be ludicrous and I’d disagree with 95% of it, and who needs to be reading nonsense like that anyway…and of course I clicked on it.

Did you ever see the movie Private Parts, about Howard Stern’s early career? There was a scene in there about how long his fans listen, and then they reveal that the people who hate him listen for even longer, and both groups said the primary reason why they listened so long was that they wanted to hear what he’d say next. Well, that’s why I clicked on it, because I wanted to see what the guy would say.

And here’s the gist of it:

Star Wars has corrupted people’s notion of a literary genre full of ideas, turning it into a Saturday afternoon serial. And that’s more than a shame — it’s an obscenity. Science fiction is in fact one of the most creative literary genres around.

He expounds on this with examples of the complexity and imagination of science fiction novels, and ends with an admonishment to Star Wars fans like you and me that we “need to be reminded what real creativity is all about.”

Are you groaning already, on the other side of this podcast? Me too, I’m right with you.

Now, a friend of mine named Lou Esposito – very sharp, witty guy, his laughter is one of the best there is on planet Earth, performed in a Shakespeare production company, excellent writer and critic, among other talents – recommended a book to me some years ago, Star Wars on Trial, and if you haven’t heard of it, check it out, it’s 99 cents for the Kindle version, use the app for your phone or tablet like I do if you don’t have a Kindle. It came out in 2006, so it had the full effect of the prequels to consider, too.

That book is remarkable, because it’s filled with essays by the very science fiction writers who are affected by the immense force Star Wars exerts – no pun intended – in the publishing and moviemaking industries. In fact, two of the “charges” leveled in the book at that “Star Wars novels are poor substitutes for real science fiction, and are driving real SF off the shelves,” and “Science fiction filmmaking has been reduced by Star Wars to poorly written special effects extravaganzas.” And each of these charges (there are eight in all) is argued by the so-called “prosecution” and “defense.”

And that’s ultimately why I clicked the link and subjected myself to the “Star Wars has ruined sci-fi” nonsense, because I liked that book (thanks, Lou!), and it had some fascinating points to make. This opinion piece on the news website, that’s another story entirely. All it claims is that you and I and the rest of the general public wouldn’t know good science fiction if it bit us on the rear end because of Star Wars.

The fact is, Star Wars didn’t do anything to sci-fi, one way or the other. You and I are the ones that did it. We saw Star Wars and we voted with our wallets. It’s that simple. Hollywood didn’t do it. We told Hollywood what we liked, and they said, “Okay, here ya go!” This is another reason why I often say that Star Wars belongs to you and me now, and why fans really get up in arms about the Special Edition changes.

And hello, we’re telling the publishing industry that we like science fiction. There are conflicting reports about the rise or fall of sales of sci-fi books in print, but there can be no denying the fact that ebooks and self-published sci-fi are burning up the bestseller charts on Amazon. So there.

Surprising or little known Star Wars tidbits, sometimes related to today’s Force Feature.
Did you know? Because Peter Cushing was given a pair of boots that were way too small during filming, Grand Moff Tarkin was wearing slippers in scenes where his feet were not onscreen.

I’m sure they were just loafer-style slippers, but just look at this pic, and imagine him wearing bunny slippers right now. It makes him seem so much more cuddly and lovable, doesn’t it? Ummmm…

I just received a bunch of Wanted posters for the crew of Ghost. Uh-oh. #StarWars #StarWarsRebels pic.twitter.com/zFKRb87J2Y

Today’s question: How many Death Star scanning techs boarded the Falcon to search for life forms?