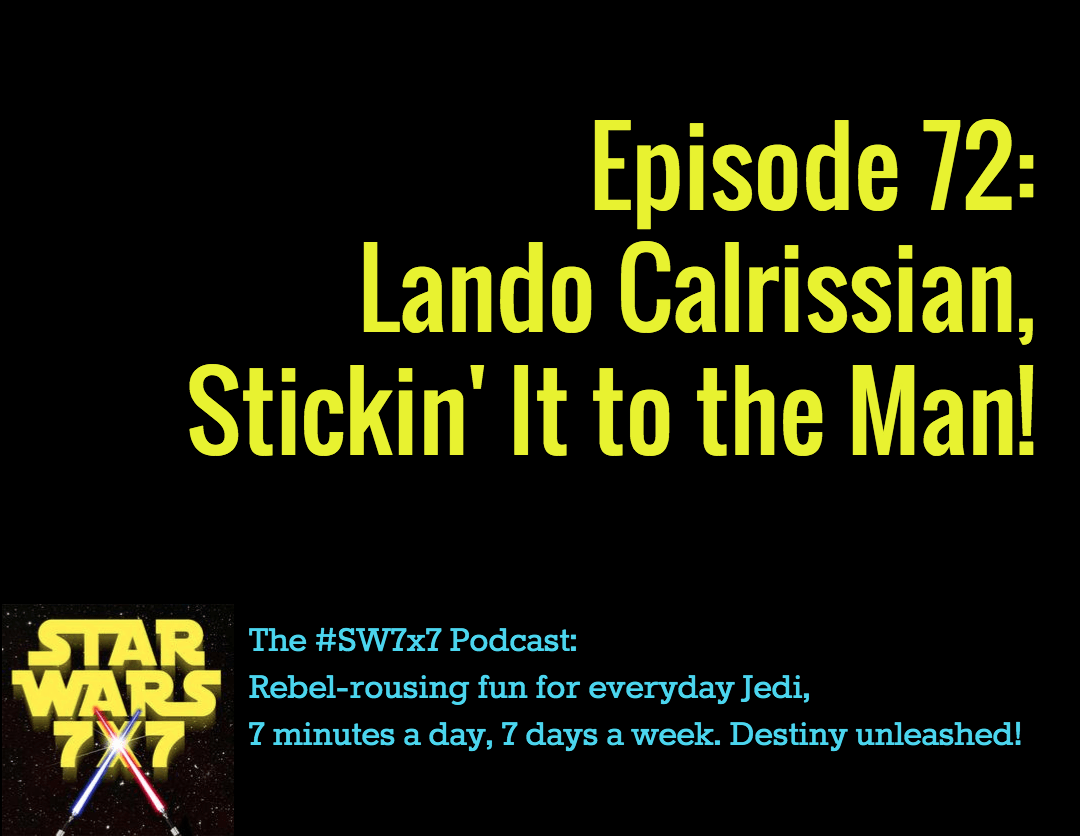 Lando Calrissian, Stickin’ It to the Man!

When I started thinking about Lando for this piece, in realizing that he doesn’t show up until we’re well into Empire, I got to thinking about Empire’s plot structure. Or lack thereof.

Lucas has always said that he was inspired by the serial adventures that used to play in movie theaters when he was a kid, all those long years ago. Empire doesn’t have a typical three-act movie structure with a beginning, middle, and end. In fact, here’s what Judith Martin, the movie reviewer for the Washington Post, had to say about it back in 1980:

The Empire Strikes Back” has no plot structure, no character studies let alone character development, no emotional or philosophical point to make.

Lando, then, is the key figure in a little mini-movie within Empire. Let’s look at him as the main character in this section, and see it from his perspective. Running a successful little mining operation, until the bad guys show up. He serves his friend and their companions up to Vader, so he thinks he’ll be okay. Then Vader makes his first alteration of the deal. He accepts it, despite not liking it, and tries to justify it to Han, saying “I’ve got my own problems.” Then Luke makes it to Cloud City, and Lando’s probably thinking, “That’s the end of that, they’ll take Skywalker and leave me alone for the rest of my life.”

But noooo! Vader alters the deal again. And the fact that Lando argues it, this time and the last time, tells us that he never wanted to go along with any of it in the first place. He’s just like Han said, responsible. He’s responsible for the lives and livelihoods of everyone on Cloud City, and he’s trying to balance that against his loyalty to his old smuggling buddy.

Eventually, and this is the thing that I just love, love, love about Lando, is that he arrives at the conclusion that it’s all really the same thing. He’s been convinced by the bad guys that he has to make a choice between the Rebels or his own people. But the real choice is whether he’ll live under the Imperial’s thumb or fight against it.

Once he realizes that, he makes the right choice. And promptly gets choked by Chewie as thanks for the trouble. Which is super unfair, since, when you think about it, Han and Chewie and Leia and Threepio brought the Imperials to Lando’s door! Lando had been operating under the radar for years, doing just fine for himself. It’s only when Han started heading Lando’s way that the Empire came calling.

Pressed into service for the Imperials, forced to betray his old friend, Lando finds himself painted into a tighter and tighter corner, until he finally stands up and says, “I’m gonna stick it to the man!”

And stick it he does. First, he makes it right with his old buddy by going undercover for months, so he could be in the right place at the right time to rescue Han from Jabba the Hutt. Then he takes on the system itself, leading the starfighter assault against the second Death Star.

Oh, for those of you who wondered – Lando defeated a band of pirates raiding the planet Tanaab nearly single-handedly, by lying in wait in the ice ring around Tanaab’s moon, dumping a load of electrified ship-disabling nets in the midst of the pirate fleet, and using a tractor beam to smash the ships with ice from the moon’s ring. He had 19 kills in the incident, and – surprise, surprise – he did it all on a bet! He won the deed to a brewery as a result, and parlayed the battle into a general’s commission with the Rebels four years later. Now that’s a maneuver.

Did you know? Billy Dee Williams’ actual middle name is “December.” Just when you thought he couldn’t get any cooler!

This IS the fridge you’re looking for. ▸ Shop #StarWars Collectibles: http://t.co/Ip8PCiJay4 pic.twitter.com/6dP9SUh2hr

Today’s question: Who were Luke’s feelings “particularly strong for,” according to Darth Vader?