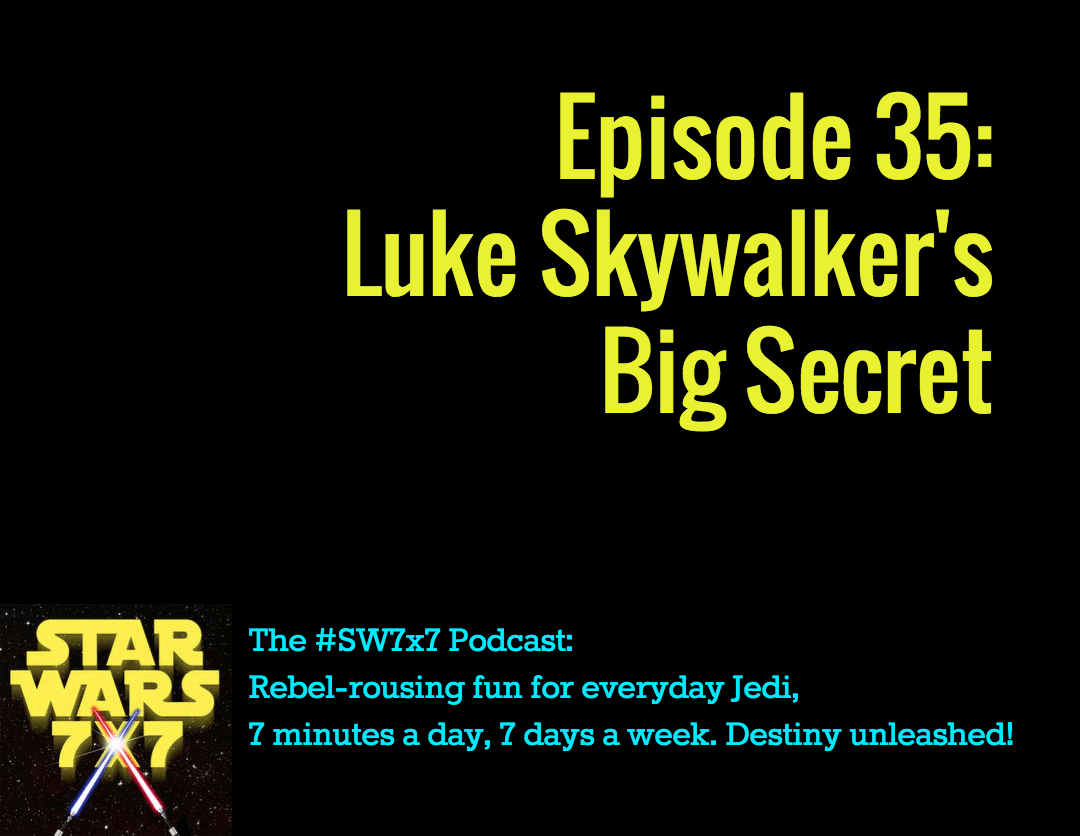 Did you know that Luke Skywalker’s death has not been depicted in the Expanded Universe? All we know is that he dies somewhere between 45 ABY and 137 ABY (after the Battle of Yavin). Wonder if that has implications for the sequel trilogy…

I am very excited that Lucasfilm is bringing back the official Star Wars FAN FILM AWARDS!… http://t.co/BdXVHgm1zD

I pulled a box down from the attic recently, and among other little treasures came across the Star Wars collector’s trading cards that I’d cut off of the boxes of Twinkies or Ding-Dongs or some such kid treat. And the card for Luke Skywalker said he was 20 years old. 20 years old!

And me, now much older than 20, went “Huh?” Because he always seemed younger than that to me. Of course, Twinkie boxes are not canon, and the official records say 19 BBY. (That’s Before the Battle of Yavin, in case you hadn’t heard that acronym being used before.) So only one year off. But in Star Wars, didn’t you think he was maybe 17 at best, whining about power converters? Big difference between 17 and 19.

Talk about growing up fast, though. In just two days – really, basically, just two days! – he goes from “Biggs was right, I’m never getting outta here!” to blowing up the Death Star. How did this not strain our credulity as kids?

I’ll tell you why, and Luke’s secret is the same secret that drives so many of our current blockbusters, from Harry Potter to The Hunger Games and even 50 Shades of Grey. All these movies and books turn on the main character discovering that he or she is something much more than they ever imagined themselves to be.

That’s also another of the reasons Star Wars has remained so popular over all these years, and nobody really talks about it. Discovering your hidden heritage – and your hidden heritage turning out to be awesome – is a deep and powerful story. And yet it manages to get lost in the conversation because there’s another powerful male figure in the movies with his own special journey of growth. That would be Han, of course.

I can’t think of any other version of the hidden heritage story archetype where the best friend is cool like Han. Ron Weasley is not cool. Peeta Mallark is not cool. They’re different levels of capable, but definitely not cool.

So instead of talking about Luke’s backstory the same way we talk about Harry Potter’s, we end up more often in the inevitable debate of who you prefer more, Han versus Luke. The majority opinion is that boys wanted to be Han when they grew up instead of Luke, because Han was cool, and Luke was, well…not cool.

Who did you want to be or be with, Han or Luke? Share your answer in the comments!

But back to Luke, and the other big reason circumstances conspire to make him an awesome character, and make Star Wars such an awesome movie. Because half of that discovery of his hidden heritage is a lie. How many other movies can you think of where the main character has one part of his hidden life revealed, and another part completely fabricated? And as mind-blowing as that turn was to me as a kid, I never appreciated the other side of it until I watched the movies as an adult, as a father. Seeing Star Wars again with the knowledge of Empire, watching Luke eat up the lie Ben so easily and gravely served up, it’s just plain incredible to experience.

Sure, I wanted to be like Han when I was a kid, but now that I’m grown up, my appreciation for Luke as a character has grown by leaps and bounds. And heck, lightsabers are sooo much cooler than blasters.

Previous Post: 34: The 7 Losers of Revenge of the Sith
Next Post: 36: Darth Vader, Intergalactic Man of Mystery