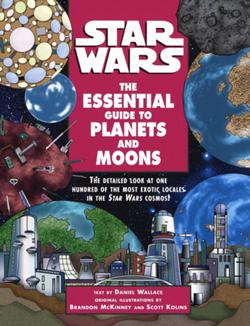 The galaxy-spanning “Essential Guide to Planets and Moons” came out on this day in 1998. Of course, Phantom Menace came out in 1999, and was undoubtedly a couple years in the making, and books like this don’t happen overnight, either. But Naboo doesn’t show up in here, which I think is a bit of a problem. On the one hand, I’m sure they didn’t want to fuel rumors about the new movies, and on the other, maybe the movie making and book licensing arms of the business are nowhere near each other.

That said, it’s water under the bridge, like as of 15 years ago.

How does he look younger than me??? It’s not fair! @realbdw #SWW2014 #StarWarsWeekends #DisneyWorld pic.twitter.com/czPG3N7pTq

Today’s question: What did Yoda say he was not strong enough to prevent?

Force Feature: Mistakes in The Empire Strikes Back

We’re talking movie mistakes this week, and moving on to The Empire Strikes Back, which is the best of the original trilogy movies by another measure – fewest mistakes caught. Now, of course, these are all visual things, so we’ll have the images linked from the blog post for this episode. I’m gonna share 7 of my favorites from MovieMistakes.com, and if you have others that you love, please add them to the comments for the episode post!

#1: Bow-legged! When Luke’s hanging upside down in the Wampa’s cave, the shot from far off shows his legs spread apart. But when you get the close up of his feet iced into the ceiling, his feet are right next to each other. The only explanation? Suuuper bow-legged.

#2: Reappearing jacket. So we lost one in Ben’s house in Star Wars, and we get another one back in Empire, when Han’s black jacket shows up out of nowhere while he’s about to be carbon-frozen. Well, it’s not carbon heated, so I guess he could have used a jacket in there.

#3: More crazy Yoda jumping tricks? Say what you want about Yoda bouncing all over the place like a superball in Attack of the Clones, but there’s no explanation as to how or why Yoda gets from flat swamp to rocky swamp so quickly to raise Luke’s X-wing. Even the mood of the scene suggests that everything is happening slowly, and not with some weird “whoop whoop whop!” Jedi speed.

#4: Look ma, I’m in Empire! When Chewie tracks down Threepio’s body in the Ugnaught’s junk room/incinerator place, we get a close-up shot of Threepio’s head going by, and you can see the reflection of a crew member on Threepio’s shiny noggin. So Threepio loses his head once in each of the two trilogies. Anyone want to bet that he’ll lose it again in the new trilogy?

#5: Another shot flip? If there are any film school folks who can explain why an editor would ever flip a shot like this, please reply in the comments for this episode’s post at SW7x7.com. In the Rebel command center on Hoth, with two shots of Leia giving Han icy stares, no pun intended, the two guys at the control panels on either side of Leia switch places. Or maybe they just called “Fire drill!” in between shots.

#6: Wardrobe malfunction. Unless Chewie has some albino condition that’s he’s been talking to his podiatrist about, there’s no way the bottom of his feet should be white. And yet they are, as seen while he’s running to get into the elevator on Cloud City with Leia, Lando, and Threepio. Or maybe when he’s stressed, the blood leaves his feet. Or maybe he had a Wookie spa treatment and foot scrub before all the stuff with the Empire went down. Could happen!

#7: Stormtrooper mambo! In the background when Lando springs the trap for our heroes, you see lines of Stormtroopers on the stairs. The two in the front are standing rather far apart in the first view, but in a closer-up shot of Lando, you can see the two lead stormtroopers have their feet practically touching. Did they scoot together when they realized they were too far apart? “C’mon, scoot over, man! We gotta close ranks here!”

Again, these are just seven of my favorites, and if you want to go deeper, there are a few more photos, and dozens upon dozens more mistake notes, linked right here. Enjoy!