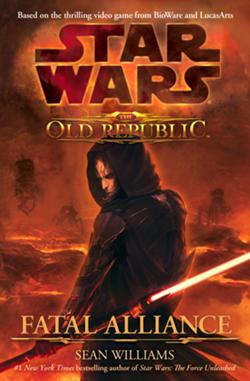 The MMORPG Star Wars: The Old Republic has also inspired novels, including Fatal Alliance, which came out on this day four years ago. Do you like to dig into Star Wars history like this, that takes place more than 3,500 years before the Battle of Yavin? Let us know in the comments!

My old knees still get carbonite pains on cold days.

Today’s question: How many droids were the Jawas trying to unload at the sale on Tatooine?

We’re talking movie mistakes this week, and starting with the one that started it all: Star Wars. Now, of course, these are all visual things, so we’ll have the images linked from the blog post for this episode. I’m gonna share 7 of my favorites from MovieMistakes.com, and if you have others that you love, please add them to the comments for the episode post!

#1: Stormtrooper banging his head on the door. As I mentioned last episode, this is the all-time classic. Stormtroopers walk into the control room where Threepio and R2 are hiding, and one of the troopers on the right clonks his head on the top of the door. And supposedly, in the Special Edition, they added a “thump” noise to it. Which is funny, but totally unnecessary. If I’m gonna say that the original films never should have been touched, then I can’t be a hypocrite and say I like that they added that touch, right?

#2: Chestplate reversal. When Darth Vader faces down Ben for their lightsaber battle, the controls on Vader’s chestplate are completely reversed in one of the shots. Did they just put his costume back on wrong between takes, or did the editor somehow reverse the film for one of the shots? Does that kind of thing happen accidentally, or do editors slip stuff like that in, the way audio people put the Wilhelm scream in?

#3: Is he really dead? When Darth Vader chokes Captain Antilles on the Tantive IV, you hear Antilles’ neck snap, so you assume he’s dead before Vader chucks him at the wall. But if you look closely, the Captain throws his arms up to protect his face from the wall before he bounces and slumps to the ground. I guess the World Wrestling Entertainment people could have taught him a thing or two about taking a hit.

#4: Who got shot? Ah, Luke and Leia, shooting lasers across the chasm at Stormtroopers. This is where the Wilhelm scream is in Star Wars, but also where the stormtroopr on the left gets shot, but magically, the one on the right is the one who falls down dead. Whoops! Maybe that armor is better than we all thought! Or maybe it’s just decorative.

#5: What happened to the hole? In the detention block, Leia shoots open the grate that leads down to the garbage smasher. But there’s only ever one shot fired, and you never see them try to make the hole bigger … and yet, somehow it gets hugely bigger!

#6: The disappearing coat. In Ben’s house on Tatooine, when Ben gives Luke “his father’s” lightsaber, you can see a coat or something hanging in an alcove, that randomly disappears after Luke’s activated the lightsaber. Foreshadowing, perhaps? No, of course not. I don’t know a heck of a lot about movie sets, but you’d think that when they set stuff up, they’d leave it in place, right?

#7: Missing radar dish. Did Lando take the Falcon for a joyride and not tell Han? That could explain why, in Docking Bay 94, you see the Millennium Falcon without its signature radar dish. Ooops!

Again, these are just seven of my favorites, and if you want to go deeper, there are 78 more photos, and dozens upon dozens more mistake notes, linked right here. Enjoy!