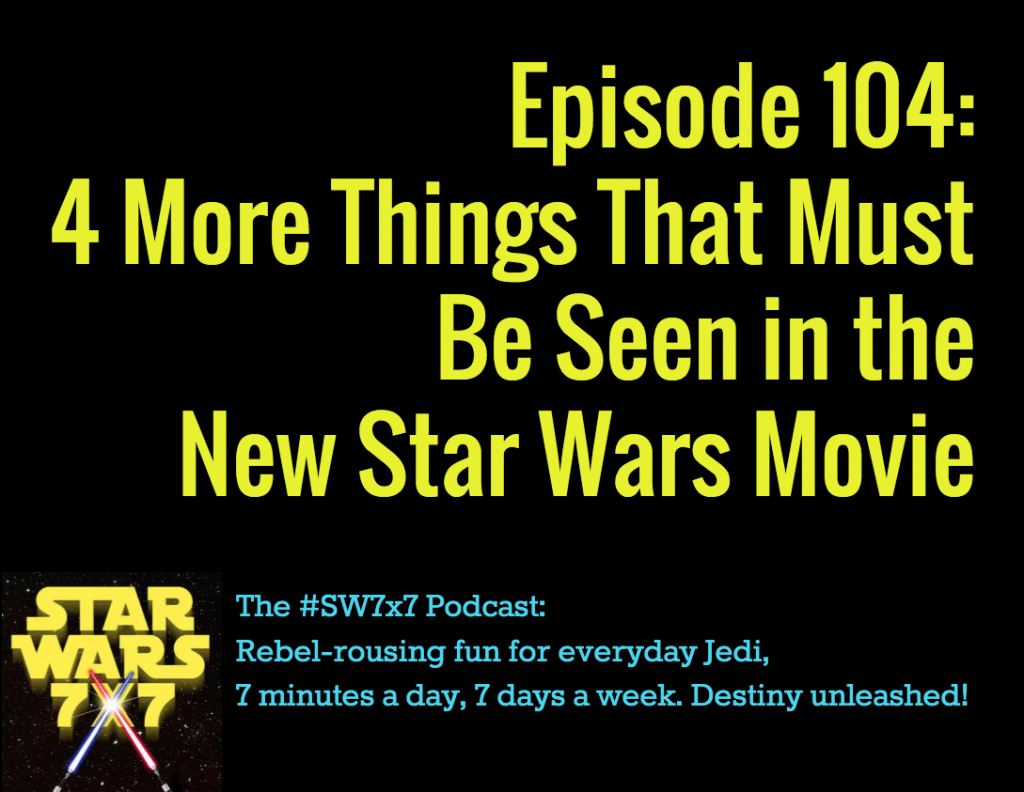 All right, after yesterday’s post about the four things the new Star Wars movie has to have, I couldn’t stop my brain on it. So here’s round two of things that Star Wars: Episode VII has to have, and I’d still love to hear your thoughts on what you think needs to be in Episode 7 to make it truly feel like a Star Wars movie. Share your ideas in the comments, or at Facebook.com/sw7x7.

1. Dogfights! Every single Star Wars movie features single-pilot or dual-pilot fighters in aerial or space combat. Naboo Starfighters, Jedi Starfighters, ARC-170s, X-wings, Y-wings, Snowspeeders, A-wings, B-wings…and of course our beloved Millennium Falcon, which is on the defensive for almost all of its action in Empire, but taking out TIE fighters left and right in Star Wars and Return of the Jedi. Just talking about it gets me all jumped up. And I gotta say, as much eye candy as there was in the beginning of Revenge of the Sith, I think I just realized the space battle above Endor is my favorite of all of them. We know we’ve got the Falcon and X-wings in Episode VII, which is fantastic news as far as I’m concerned.

2. Multi-stage finales. Empire ends with Luke vs. Vader, while Leia and the gang try to escape Cloud City. Jedi features action on Endor, in space, and on the Death Star. Phantom Menace pushes the finale action on four fronts! Okay, that may have been excessive. But the point is, different subplots in the movies end up getting tied together into one huge series of simultaneous climaxes. Ridiculously satisfying way to end a movie, if you ask me. Looking at the nearest thing Abrams has done in the past – namely, the Star Trek movies – the finales tend to be very linear and single-minded. That’s not a criticism, I enjoyed those two movies. Merely an observation. That means he’s gonna need a crack editing team to play in this different style of moviemaking. Which he undoubtedly has.

3. Weird wipes! It sounds even funnier when you say it that way. So for those of you not in the film industry, which includes me, since I had to look up the term – I knew what I was looking for, I just didn’t know what it was called – Wikipedia defines a wipe as “A type of film transition where one shot replaces another by travelling from one side of the frame to another or with a special shape.” And interestingly, George Lucas is specifically cited in the entry for his prolific uses of them, and how it hearkens back to the filmmaking style of Akira Kurosawa. Lucas has used cross-hatches, diagonals, windshield-wiper style, and heaven knows how many others. Actually, there’s a fantastic video posted by a guy named Gil Bates that captures all the wipes from Revenge of the Sith, something like 80 or more in a 2-minute video. 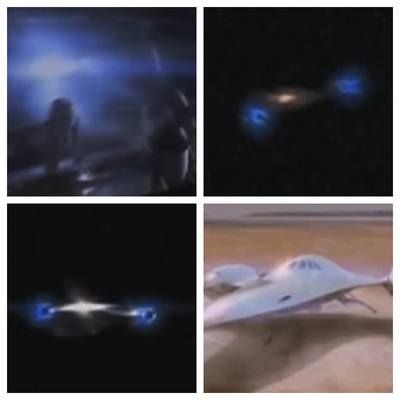 4. Lens flares! Okay, I said it. Now, for those of you not versed in it, and I’m in the “I know it when I see it” category, so I’m right there with you, the Wikipedia definition is so unhelpful that I’m going to share it anyway for sheer entertainment value. Here we go: “Lens flare is the light scattered in lens systems through generally unwanted image formation mechanisms, such as internal reflection and scattering from material inhomogeneities in the lens. These mechanisms differ from the intended image formation mechanism that depends on refraction of the image rays.”

Now, this is a signature effect that Abrams uses in his movies, but he copped to getting carried away with it in his last movie, Star Trek Into Darkness. As reported in the Guardian: “This is how stupid it was,” said Abrams. “I actually had to use Industrial Light & Magic to remove lens flare in a couple of shots, which is, I know, moronic. But I think admitting you’re an addict is the first step towards recovery.”

“A couple,” he says?! There’s another great video by Dylan Browne, which also gave me a bit of motion sickness, fair warning, which documents 826 lens flares in Star Trek Into Darkness in the space of two and a half minutes. But lest you think it’s an Abrams thing, Lucas is no stranger to lens flares, either. We’ve got four screenshots of lens flares on Padme’s Royal Starship from Phantom Menace alone to prove the point. And in moderation, I agree with Abrams, the effect is definitely cool. In moderation.

Okay, it’s your turn! What do YOU want to see in Episode VII? Fire up those comments!

There’s some debate over this, but it looks like that might be Darth Vader’s suit in the background of Watto’s junk shop, when Qui-Gon comes back with the gang to make his betting proposition for the podrace. Some fans at the Easter Egg Archive think it could be an IG-88 type of body instead of the suit. Check it out and let us know what you think at Facebook.com/sw7x7!