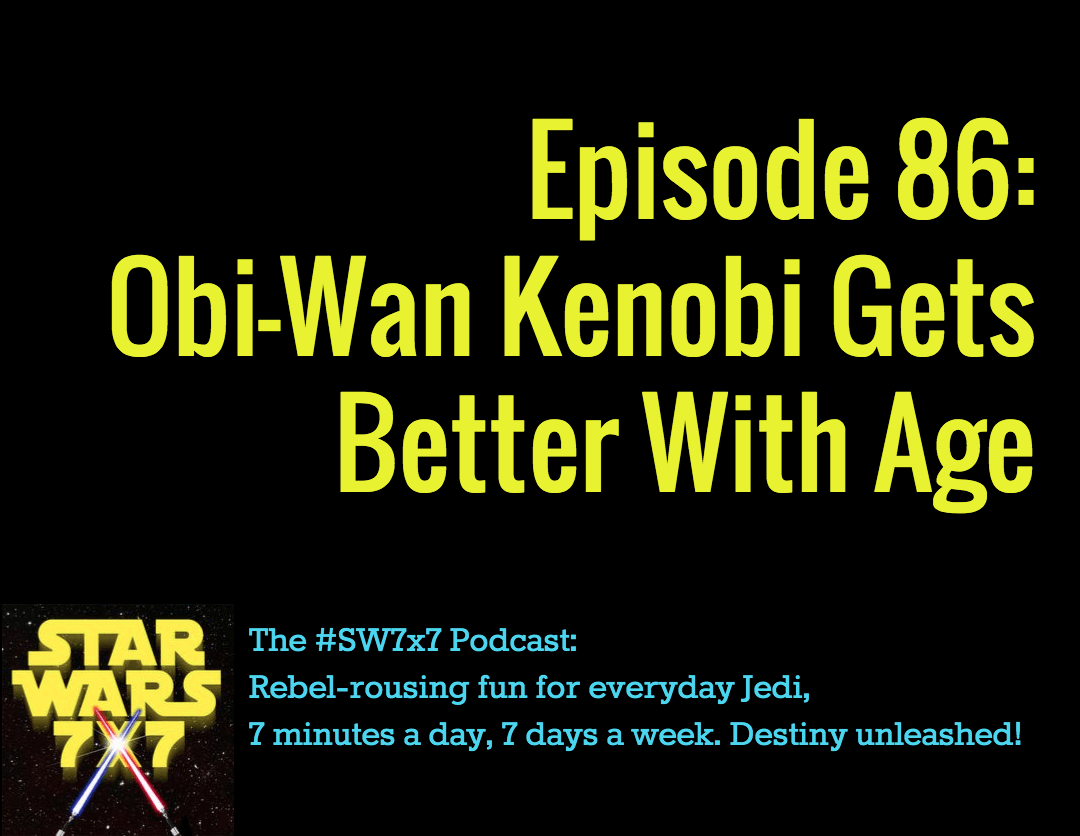 Not so long ago, I waxed rhapsodic in the middle of an episode of the podcast about how underappreciated Obi-Wan Kenobi is. And maybe that’s just me projecting, because I didn’t appreciate him before, and certainly not as much as I do now.

But I don’t think I’m the only one. From an Original Trilogy perspective, we only had Obi-Wan for one movie, really. And he was clearly a supporting character. Han, Luke, Leia, those were the stars of the show.

So again, from the OT perspective – despite being referred to as a crazy old wizard by Uncle Owen before we see him, here’s our experience of Obi-Wan in Star Wars, aka A New Hope:

1. He used to be a general in something called the Clone Wars. So the crazy old wizard is also a big shot military guy.

2. He used to train Jedi knights. At this point we don’t know much about them except that they were special, they were the elite class of warriors, and Ben was training them. Most impressive.

3. He can manipulate the minds of stormtroopers. What?

4. He’s wicked calm and cool in the middle of a bar fight, slicing off an alien arm like it was nothing.

5. Knows how to make deals with underworld types like Han Solo.

6. Teaches Luke to have a first Force-feeling moment on the Falcon.

7. Volunteers to infiltrate an enemy battle station on a suicide mission to turn off a tractor beam.

9. Lets himself be martyred so he can become a Force ghost, and guide Luke to blowing up the Death Star.

Now that’s intense. And he reminds Yoda in Empire that he, Obi-Wan, was also reckless once upon a time. That’s the only other clue we get to who he was as a younger man.

So as opposed to Darth Vader, whose character arc had to show how he went from being Anakin to being Vader in the prequels, Obi-Wan Kenobi’s character didn’t need that kind of full-blown story arc. And yet we needed to see who he was in relation to Anakin in order to understand the “certain point of view” that Kenobi had the audacity to lay out. Yeah, so add “inveterate manipulator of the truth” to the list of his A New Hope accomplishments.

What we got in the prequels with Obi-Wan was fan-flippin’-tastic. We got him at all three levels – Padawan, Knight, and Master. Here’s another fun fact for you – in The Phantom Menace, he became the first Jedi in 1,000 years to kill a Sith lord. 1,000 years! And for those of you who haven’t watched the Clone Wars cartoons but plan to, close your ears for the next 15 seconds, starting now, so I can say that even though Darth Maul somehow grew spider legs and came back to life, I still think that counts as a kill.

Okay, ears unplugged, thank you for your cooperation. So now we get to the disappointing thing, which is that in order to make Anakin seem like all that and a bag of chips, they had to go and make Obi-Wan seem like he couldn’t handle his business. Like not liking having to fly his starfighter in combat of any kind, having to be helped to deal with the nest of Gundarks. Or getting removed from the action of both lightsaber duels with Count Dooku. In fact, he should have been dead after the giant platform got pulled down on him in the beginning of Revenge of the Sith, that thing should have cut him in half.

But even in the midst of that, we get Obi-Wan jumping recklessly through Padme’s window to catch the assassination droid, another great bar scene, and the awesome fight between him and Jango Fett. And for my money, Obi-Wan at his reckless best has to be when he decides to take on Grievous and a good chunk of his army on Utapau. Alone. Sure, the cavalry does arrive, but you can see the crazy in Obi-Wan’s eyes as he faces off to attack Grievous.

Oh yes, he’ll keep it “civilized,” but if it comes down to it, he’ll rip the cyborg plating off your chest, grab a blaster, and shoot your exposed heart until it bursts into flames. How’s that for being one tough flippin’ dude you don’t want to mess with?

Surprising and little known Star Wars tidbits, usually related to today’s Force Feature.
Did you know? Though Obi-Wan had previously been listed in reference materials as being born on Coruscant, George Lucas himself changed the name of the planet to “Stewjon,” after Jon Stewart! That happened at Celebration V, and it became canon immediately.

Like a Jedi party, ain’t no party there is.

Yesterday’s answer: Two if you count only Leia kissing Han and not him kissing her back; four if you count those.