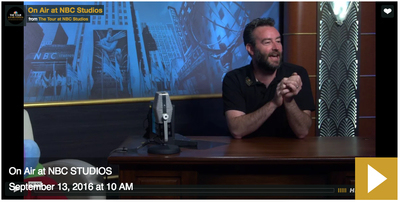 Hey Rebel Rouser! Welcome to Star Wars 7×7. I’m your host, Allen Voivod – that’s me hosting a show from behind Jimmy Fallon’s old Late Night desk (it was an NBC tour thing, but still).

In case you’ve ever wondered about the guy you hear doing most of the talking on this daily Star Wars podcast, these seven short stories should satisfy your curiosity.

1. I grew up in the San Fernando Valley, about 15 miles northwest of downtown Los Angeles. Star Wars, as you might expect, was a formative influence. I had most of the toys – the big one I never got, the Death Star, was given to me years later by my wife as a Valentine’s Day present. Sweet, right? As a kid, I had bootleg copies of the movies on VHS, and wore them down relentlessly. I also have very vivid and happy memories of kicking back on the couch at my grandmother’s apartment, reading Han Solo’s Revenge while she watched soap operas. I couldn’t get enough. Still can’t.

2. I lived in Westwood and West Los Angeles for a good chunk of time, during which time I earned bachelor’s degrees in sociology and psychology, an MBA with a finance concentration, and a wife (that’s “Brainstormer Lani”). Our finances being what they were, I sold most of my vintage Star Wars toys to pay for our wedding reception. Still have a few fighters and figures. Yes, I let the kids play with the fighters. The figures, well, you know how things get lost around kids sometimes…

3. We moved to New Hampshire (from where Brainstormer Lani hails) a few years later so we could afford a house on a bit of land, be closer to a larger part of the extended family, and have a beautiful place to raise our two boys – Quizmaster Joe and Scorekeeper Declan. They aren’t as into Star Wars as I am, which is perfectly fine, but there are other fandoms we love and appreciate together. 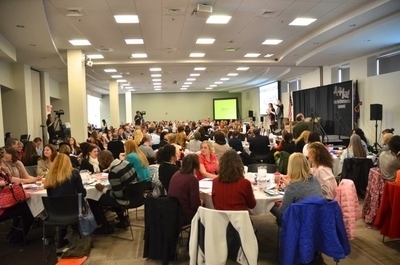 5. I’ve been speaking in front of audiences for almost my entire life. My mother likes to tell the story of how, while bored waiting in line to see Santa at a mall when I was four or five years old, I climbed up on a mannequin stand and started an impromptu game show, with my buddy in line as my first contestant. In the business I now own with Brainstormer Lani (Epiphanies, Inc.), we’ve put on workshops and events for groups of all sizes, including the “A-Ha!” Summit, which ran for six years and was consistently the largest social media marketing event in New Hampshire. (That’s us on stage at the last one we did, in 2014.) In addition, under the auspices of the U.S. Department of State’s International Visitor Leadership Program (IVLP), Lani and I have met with delegations from 37 countries to speak about the use of social media for governments, small businesses, media, and NGOs.

6. The idea for Star Wars 7×7 was born in April 2014, right around the time Disney/Lucasfilm decided to reboot the canon and designate the Expanded Universe as “Legends,” and when that black-and-white photo of The Force Awakens table read was released. At the time, I’d been listening to Star Wars Minute with my boys while driving them to and from school. It was the only podcast out there that you could listen to in a short span of time – I rarely had a chance to listen to some of the longer podcasts in their entirety, and I thought there could be a space in the Star Wars podcasting world for a shorter-form show that focused on the broader world of Star Wars news and storytelling.

7. Star Wars 7×7 debuted on 7/7/14 (perfect!) with four episodes available on iTunes. Today, having been downloaded in more than 160 countries, I’m still holding out for a listener in Antarctica. It’ll happen someday! In addition to the more than 2,600 numbered episodes, I’ve produced a plethora of bonus episodes, usually for major news releases, trailer breakdowns, and Star Wars Celebration event wrap-ups. I’ve conducted dozens of interviews, and been interviewed myself on the Celebration livestream as well as on TV, radio, other podcasts, and more.

That’s your Star Wars 7×7 host in a nutshell. Thank you for reading, and thank you for listening, too. After all, YOU make this podcast possible!