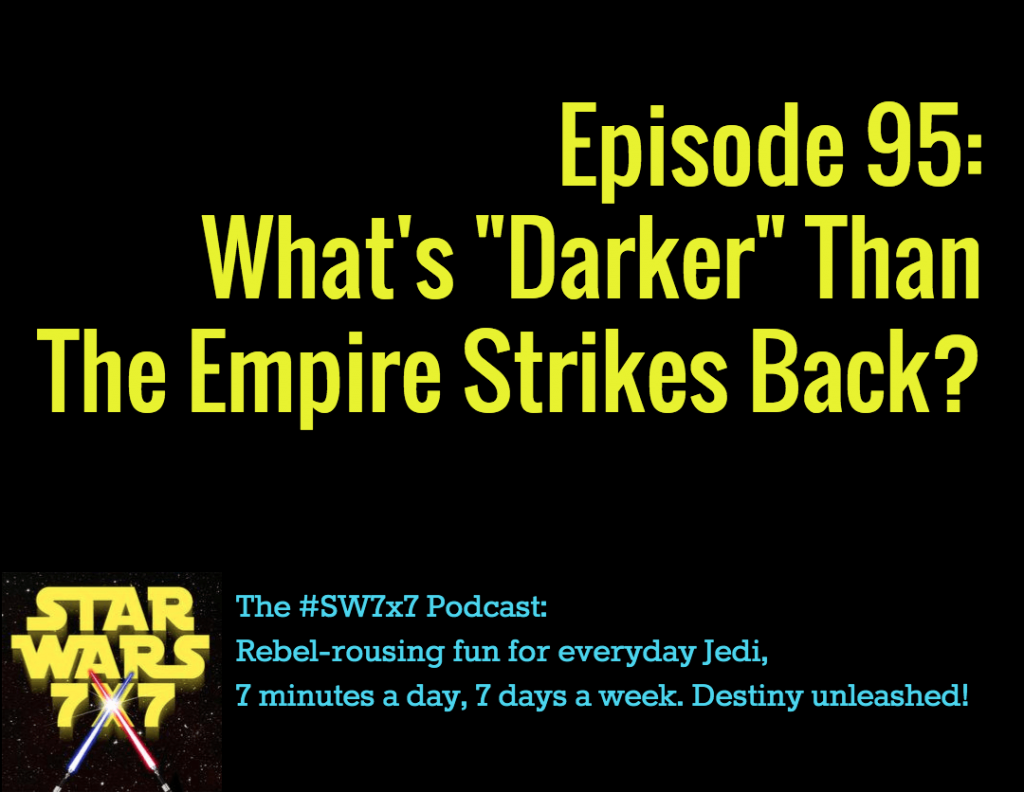 So yesterday, I shared with you why I like The Empire Strikes Back (because I love everything Hoth, as a two-second summary), and how Tim McMahon at The Expanded Fandomverse Podcast had said that a lot of their guests pick Empire as their favorite film, but the reason is that it’s a “dark” movie, compared to the other two in the trilogy.

Now, I disagree with the assessment that it’s a dark movie, or even that it’s darker than the rest of the trilogy, but I spent more time talking about my history with Empire and Hoth, so today I thought I’d explain what I mean about it not being dark in a little more detail.

The reason why people think it’s dark, or call it dark, it’s because they see that there’s no clear victory for the good guys, the way there was in Star Wars. Vader has defeated Luke and cut off his hand. Han’s been frozen and carted off to Jabba the Hutt. The Rebel base on Hoth has been destroyed. Is the Rebellion better off as a result of the events of the movie? No, clearly not. How about our heroes? Well, aside from Luke getting a cool new cyborg hand and gaining a new ally in Lando Calrissian, no, they’re not really better off, either. So yes, the dark argument, I get it.

And my thing is, that’s an adult argument. If we start from the idea that these are kids’ movies – and that’s what George says they are, so let’s roll with that – and if we consider how strongly George was influenced by Saturday morning serial movies and cliffhangers, then what we have here is the Saturday serial to end all serials. Attack, escape, capture, rescue.

According to canon as it stands right now – and as it stood in 1980! – the only transport ship we saw trying to leave Hoth successfully escaped. And when General Rieekan and Princess Leia talked about the riskiness of trying to protect two transports at once, there was no talk about other transports being blasted into space dust. And at the end, we see a huge Rebel fleet. So we have every reason to think the majority of the Rebels escaped.

Now, even though Han gets frozen, he survives the freezing process, so he’s not out of the equation yet. Leia and Chewie remain captured until Lando rescues them, and the three of them rescue Luke, and they all escape to safety with the droids.

And at the end, what are we left with? Luke telling Lando he’ll meet him at the rendezvous point on Tatooine, and Lando promising Leia that they’ll get Han back, with a smile on his face. And Chewie saying the same thing, we can only assume. So there’s a plan to rescue Han that they’re setting in motion right now, and because we all believe that the good guys eventually win – because that’s how these stories work – then what we’re left with is the cliffhanger of “We know they’ll rescue Han, but how are they gonna do it?”

And even if you want to talk about individual bits and pieces, I think Star Wars beats Empire for alleged darkness. In Star Wars, there are more Rebel deaths than in Empire, and many of the pilots are screaming as they’re blown up. Vader’s kill of Captain Antilles, with the audible crushing of his windpipe, beats any other choking Vader does. Han was tortured, but so was Leia. A bloodily dismembered Walrus Man in the original beat anything in Empire, until they added the Wampa dismemberment in the Special Edition. Now it’s a wash. Sure, you get the cutting open of the Tauntaun in Empire, that’s appropriately gross, but only Star Wars has as brutal a scene as the murder of Uncle Owen and Aunt Beru. Whatever the stormtroopers did to them fry them down to skeletons that fast had to be horrible, and the bodies look like they were trying to crawl away in vain.

Okay, so that’s my take. What do you think? Have your say at Facebook.com/sw7x7!

Surprising or little known Star Wars tidbits, sometimes related to today’s Force Feature.
Did you know? The Phantom Menace is the only one of the six Star Wars movies in which an organic character does not get dismembered? I’m not counting robots, and Darth Maul getting cut in half doesn’t count as dismemberment in my book. What’s your favorite Star Wars dismemberment? Let us know at Facebook.com/sw7x7!

How #StarWars stacks up with other blockbuster movie franchises: http://t.co/Ew5Ct0scYQ pic.twitter.com/UUqBIqVHqn

Today’s question: What character barks at the mere mention of food?

Previous Post: 94: Why The Empire Strikes Back Is Not “Dark”
Next Post: 96: What Grimm and Snicket Can Teach the New Star Wars