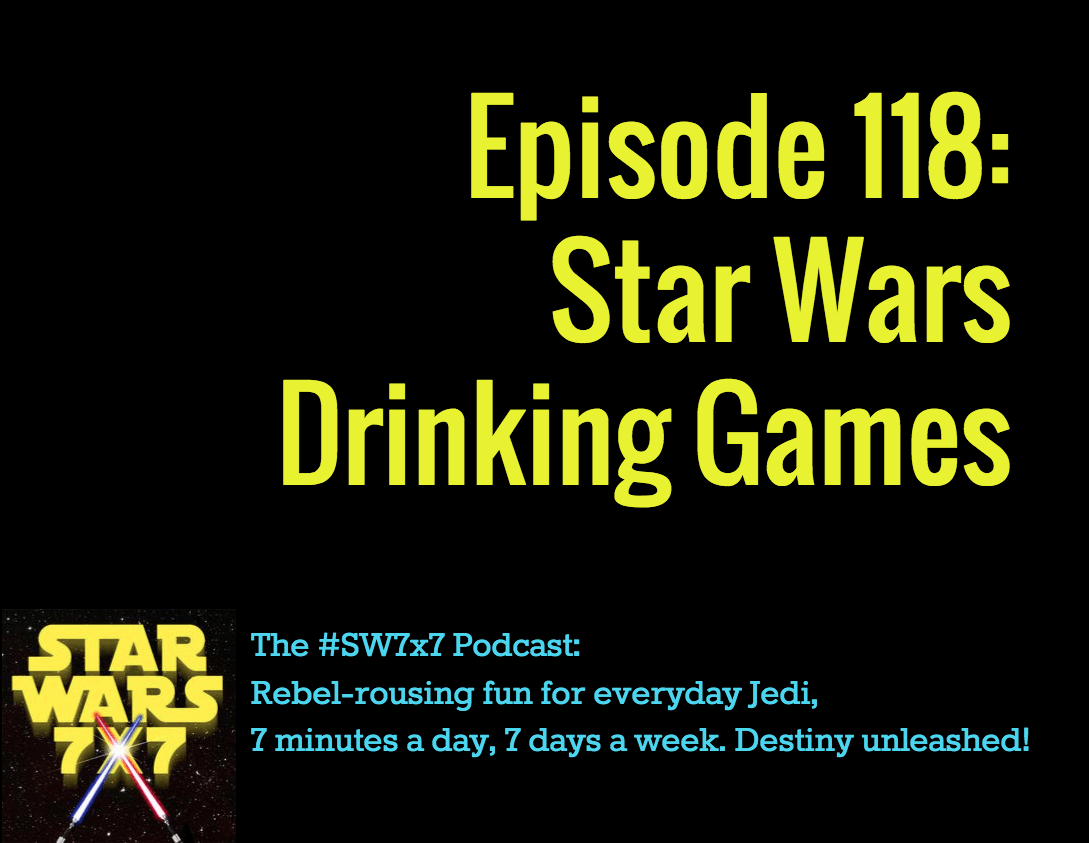 So you know how when you start to Google something, and Google starts to suggest things for you? I had myself logged out of Google the other day, and did a search, and the auto-suggest tool came up with only 5 things:

and Star Wars: The Old Republic

So it occurred to me to play around with this, and see if I could find a couple of Star Wars Internet rabbit holes. Because when I’m logged into Google, I get a very standard set of options, like the ones above, and also:

and Star Wars: The Clone Wars

So I thought we’d try a little something different today, and hit the randomizer, so to speak. And I came across something that maybe you had already found in your college days, but somehow this missed me entirely. Maybe because I didn’t know a lot of people who would hang out and watch Star Wars movies on VHS with me in college. The dark times.

I chanced upon the wide variety of Star Wars drinking games, and you’ll be pleased to know I’ve come across games for all six movies. Everyone has slight differences here and there, so I’ve pulled my own list together based on the commonalities I saw across different ones, and I’ve tried to keep it such that you could use this list for all six movies.

This would also be the part where I have to say, if you’re drinking anything other than blue milk, please drink responsibly. So here we go – drink every time:

1. Someone has a bad feeling about this.

2. Someone insults or boasts about the Millennium Falcon.

3. Someone says something that sounds dirty.

6. Lightsabers are turned on or off.

7. Someone delivers an insult.

8. The Wilhelm scream is heard.

12. A planet is described as having only one climate.

13. An alien species is described as having only one occupation.

15. Someone is captured or held captive.

16. A female that’s not Leia or Padme appears on screen.

17. Something bad happens to a droid.

18. Someone or something laughs.

19. A spaceship is destroyed.

20. Someone whines or complains.

21. A ship enters or comes out of hyperspace.

Maybe I’m a lightweight, but I could only do one movie at a time at this rate. And if you think 21 items is a long list, Google some of them out there, and you’ll be saying, “Look at the size of that thing!”

In fact, one of the lists I came across and particularly enjoyed is from Mumby at the Movies, and it’s as elaborate as trying to participate in a midnight screening of The Rocky Horror Picture Show. Here’s just a sample of the ones they came up with:

General: Drink once every time Vader, Palpatine or the Emperor says “Good”

I: Finish your drink and shout “KNEEL BEFORE ZOD!” every time there is a close-up of Terence Stamp

II: Drink once every time a romantic line feels like it belongs in a serial killer film

III: Drink whenever General Grievous coughs – one drink for each distinct cough

IV: Drink once and whisper “Count Dracula” whenever Peter Cushing has a close-up

V: Shout “DEEP” and drink continuously at a slow pace during the scene with Luke in the cave

VI: Drink once every time you wonder how David Lynch would have done a given scene

Since it’s Thursday, just print out the blog post version of this episode, commandeer the nearest party with your DVDs, and make sure you bring along a DD – that’s a Designated Droid, to get you back home safely.

Can you believe it! Two years ago today, Lucasfilm announced that it was being bought by Disney, and that we’d all get our long-dreamed-about Sequel Trilogy. I know we’ve still got more than 400 days left until the premiere, but really, we’re on the downhill slope now. Remember how that felt? When you’d waited through more than half the days until the next movie? Well, we’re there, party people, it’s happening…

Yesterday’s answer: Like “Play it again, Sam” in Casablanca, “Punch it, Chewie” is never actually said in a Star Wars movie! Its first Hollywood use is in Kevin Smith’s Jersey Girl. Thanks again to our 1138 Patron Kevin Skarritt for that one.

Today’s question: Who’s the first Ewok to nearly get blasted by a laser bolt?