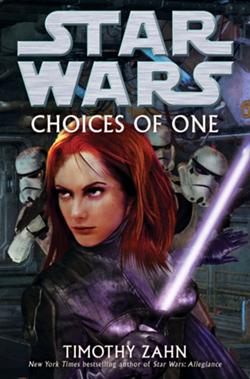 Choices of One, a novel set in the time between Star Wars and The Empire Strikes Back, came out on this date three years ago. Do you have a favorite Expanded Universe novel, or “Legends” one, as they’re now called? Name it in the comments!

Today’s question: Where did Imperial scout ships discover the remains of a Rebel base?

Well, here’s the crazy thing. George Lucas, as we all know, took it upon himself to re-edit all of his movies, because they weren’t living up to his standards. The technology had finally caught up to vision, and by George, he wasn’t going to stand idly by. He’d have to do something about it.

So that’s where the numbers come in. According to MovieMistakes.com, those numbers represent the numbers of mistakes present in the Star Wars movies. 271 for Star Wars, 185 for Empire, 203 for Jedi, 149 for Phantom Menace. 160 for Attack of the Clones, and 183 for Revenge of the Sith. Possibly not surprising to see the numbers go down for the newer movies. But very heartening to know that Lucas will never get to them all.

What kind of mistakes, you might wonder? Everything from audio issues to continuity foul-ups, revealing mistakes to visible crew and equipment, and some things you just can’t make up.

This week we’re going to cover some of the best screw-ups from each of the movies, because Heaven knows they’ve all got enough of them to talk about. I’ve loved this kind of thing since the first time I became aware of a mistake in Star Wars. While C-3P0 and R2D2 are locked in the Death Star control room, a squad of stormtroopers come in to see just what’s going on. But the stormtrooper on the right hand side of the screen, he walks right into the not-lifted-all-the-way door. Slams his helmet right into it, and stumbles back for a moment. I first saw that back in college, and that’ll always be my all-time favorite. I still laugh every time.

Some of the stuff, like the number of trinkets on Obi-wan’s table when they’re listening to the Princess’ message, are just continuity things that aren’t really worth remarking upon. Others, like when Luke gets back to Yavin IV after blowing up the Death Star – I’ve watched that scene SOOOOO many times, and I know people say he says “Carrie!” in the film, but I’m just not hearing it. Never been able to.

Either way, one thing I can say for sure is that it doesn’t really take me out of the narrative when I see these little gaffs. On the contrary! I, like many of you out there, realize that Star Wars is just a story – an epic saga of a story, but a story nonetheless – now being told by and to many billions of people. For me, the story is so deeply ingrained inside, I can watch the screw-ups and not think of them badly for not locking down every last detail.

So, coming this week, each podcast will focus on 7 funny things gone wrong with each of the movies. Get ready to be surprised!