What the secret about Star Wars that George Lucas himself doesn’t know? And why won’t anything be as big as Star Wars ever again? Have a listen to the inaugural episode of Star Wars 7×7!

Though he’s no longer with us, today was the birthday of William Hootkins. You know him as the unforgettable Jek Porkins from Red Squadron, killed during the attack on the first Death Star. Porkins, we hardly knew ya! 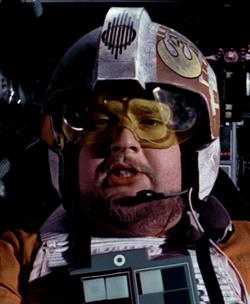 If you love someone set them free, definitely don’t force choke them when they don’t join the Dark Side.

Today’s question: What massive vehicles does the Empire use for ground assaults?

The fact of the matter is, I don’t physically remember seeing Star Wars in the theater. I was six when it came out, and my mom says she took me over and over again. I’m not going to call my own mother a liar, right?

I do know that all the times I did see it in the theater – like, a dozen times at least, since my mother kept count – didn’t come from the first run. When you think about it, that’s really crazy, because NO movie these days gets re-released. Once The Avengers is gone from your local Cineplex, it’s gone, Daddy, gone. And I’m not talking about the Special Edition re-release in 1997, either.

No, Star Wars came out in 1977, and got re-released in 78, 79, 81, and 82. It kept getting put back in theaters because it was just better than anything else by more than 12 parsecs. Even Titanic, the biggest movie of all time until Avatar beat it, it took a 3D IMAX remastering to get that back into theaters. Dozens of theaters kept Star Wars running for more than a year. A year!

But back to me as a kid. I’d love to hire a hypnotherapist to help me remember seeing Star Wars in the theater, but what I DO remember are the toys. Those I loved more than anything. Can you relate to that? I was one of those kids that didn’t take them to the sandbox or the beach or anywhere, because I didn’t want them to get messed up. Not in the toy collector’s sense, in the beloved possession sense. The toys opened up that world to me, and through my play, it belongs to me now.

Nothing before or since has spawned that kind of cultural possessiveness and devotion. This was an entirely new cultural moment. We’re so bombarded with media stuff these days that our kids won’t ever see a phenomenon like this. Harry Potter came close, but unless JK Rowling opens up the wizarding world to new stories and developments, it won’t be the same. The Marvel Cinematic Universe of the last few years is really 50 years in the making, and they missed their biggest window of opportunity. Not that they’re complaining. They’ll make money by the boatload, but they can’t create the same loyalty.

So Star Wars stands alone. You and I as fans have made Star Wars the enduring phenomenon that it is. This is the secret that George Lucas never understood. Star Wars belongs to us now. That’s why people get all up in arms about the changes he makes. He’s not messing with a film project anymore. He’s messing with US, with our memories and our souls. Comic books sales still haven’t recovered from the late 90s, when alternate universes became all the rage and messed with everyone’s idea of continuity. Rowling knows better, and she won’t do it.

When you create something so resonant, it creates a new kind of public trust. You and I own the Star Wars experience. And you and I will get to celebrate that experience together, seven minutes a day, seven days a week, right here on Star Wars 7×7.