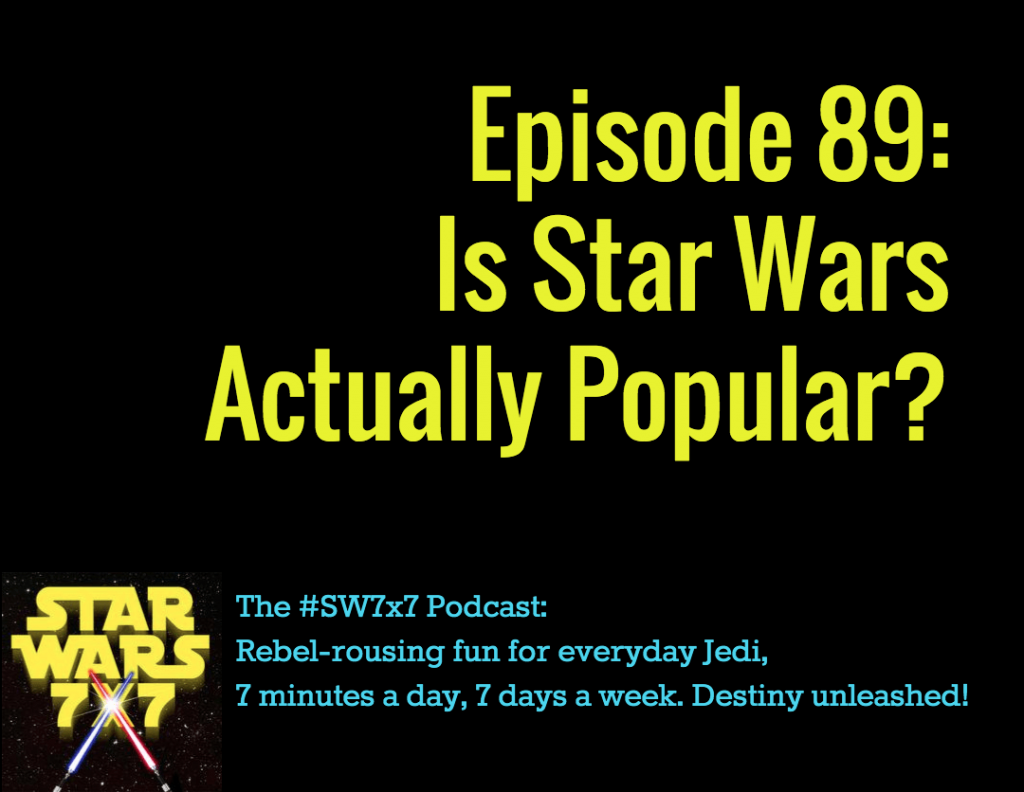 One of the things we do here at Star Wars 7×7 – and maybe I should stop a second and say, I keep saying “We,” even though it’s really “I” for the most part, so I must be saying “We” to include whatever muse is inspiring the Star Wars 7×7 podcast on a given day – is look at Google for ideas about what to talk about.

Because that’s objective, right? If people are looking for it on Google, then that means it’s something of interest. And if I’m covering things of interest, then the podcast has a better chance of faster success. With me so far?

Usually I use Google’s autocomplete feature for researching topics, but this time, I took it a little further, and went into Google’s AdWords pay per click advertising system. Specifically, I lwent ooking into their keyword planner, which lets you search different keywords and tells you an average number of monthly searches, advertiser competition, and other things to create ad campaigns.

So here’s what blew me away:

Looking at the phrases Star Wars and Star Wars Episode 7, Google generated a list of 691 related keywords and phrases. And this combined list resulted in only about two million searches per month in the US.

Now think about that for a second. There are 314 million people in the United States. Do you mean to tell me that less than 1% of the US population does a Google search on any Star Wars related topic in a given month? Doesn’t that seem crazy low? I mean, especially considering how nutty the Internet is getting with rumors and spoilers and speculation about Episode VII.

I mean, the Star Wars Facebook Page has 12,762,621 Likers as of this recording, but that’s global. How many of those can be in the US, when the lion’s share of Facebook users are outside the US in general? Definitely not the majority.

So you kind of have to ask yourself…is Star Wars really that popular after all, if less than 1% of the US population searches for something Star Wars every month?

Well, to answer this question, I decided it would only be fair to compare apples to apples, if you will. So I applied the same keyword tool to a few more popular franchises: The Avengers, The Hunger Games, Harry Potter, Star Trek, and X-Men.

You can see the results for yourself at SW7x7.com, and I’ll say off the top that there are things that screw up the data, which have to be accounted for – like the fact of having a movie opening in the last 12 months, which creates spikes of interest in your franchise and related brands.

What I found is that in even the most popular month out the last 12, “The Avengers” maxed out at less than 1.5 million searches, 25% less than Star Wars. Same goes for “Star Trek.” Neither of these franchises have films coming out within the next year, which matches up against Star Wars about as well as can be hoped for.

The X-Men and Hunger Games charts, on the other hand, show you something different. The numbers look more in line with Star Wars’ numbers, except for when their movies came out this year. Then they have huge 5-6 million search spikes, which then die down over time.

Meanwhile, the Harry Potter franchise is giving Star Wars a run for its money, as it reached 3 million plus searches in a given month, with about as many keywords as Star Wars had. And technically speaking, Harry Potter fans have nothing to look forward to!

So, 2/3 of a percent of the US population looking for anything Star Wars-related on Google in a given month. I know that when Star Wars Episode 7 comes out, if it makes a billion dollars at the world box office, then let’s keep the math simple and say that a maximum of maybe 100 million people will go see it worldwide. And suddenly, the world of Star Wars fans seems a heck of a lot smaller than I thought it was.

What about you? How popular do you think Star Wars is? Let us know on Facebook!

Special thanks to eagle-eared listener Kevin Skarritt, who alerted us to an audio glitch on Episode 86, and did so with tremendous politeness, too! We’ve corrected the issue, so if you tried to listen to 86 and had issues, too, give it another whirl after this episode, will you?

Instead of Indiana, how about #Chicago Jones – Harrison Ford hanging out with #StarWars co-star @carrieffisher ~ pic.twitter.com/Ja12PHMICO

Today’s question: Who was called both a “fool” and a “great man”?

Previous Post: 88: Five Fast Facts About the Millennium Falcon
Next Post: 90: How Star Wars Neither Saved Nor Ruined Sci-Fi