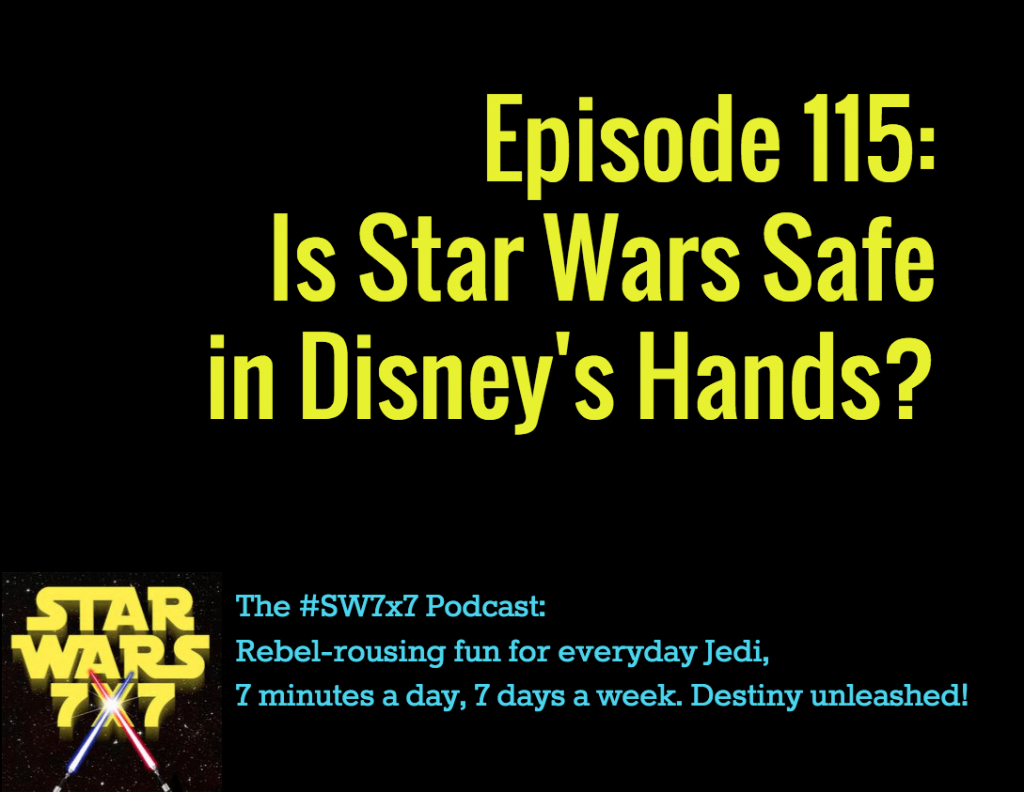 Three year intervals. Disney buys Pixar in 2006, Marvel in 2009, and Lucasfilm in 2012. These are three of the most successful creative businesses in the entertainment industry today, and prior to 2006, everyone had been in agreement that Disney by itself was stagnating. Pixar was supposed to reinvigorate the animation side of the business. Marvel and Lucasfilm? Those were franchises with a license to print money, and hadn’t even realized their full potential.

Now, when you look at the creative teams involved with the making of the Pixar, Marvel, and Lucasfilm movies post-acquistion, you don’t see a lot of Disney faces, per se. On the contrary. The Pixar and Marvel creatives are much the same as they were prior to the acquisitions. As for Lucasfilm, aside from George stepping out of any deep involvement with the day-to-day development of the franchise, his team is pretty well intact, too, and the newbies, like J.J. Abrams, are there with his blessing.

The big question on people’s minds with every acquisition was, how much will Disney get involved with the work? That’s putting it diplomatically, of course. Some people were more pointed, wondering if Disney would, basically, screw them all up.

For the last few years, Disney has not done that. They’ve been pretty hands off for the most part – at least, from what we as fans can tell from the outside. They wouldn’t mess with the creative, but they’d exploit the heck out of the creative properties, with licensed products, with theme parks attractions, and a host of other revenue generating opportunities.

The last three Pixar movies, Cars 2, Brave, and Monsters University, plus the two Planes animated spinoffs from Cars via DisneyToons Studios are also the ones that have received the worst reviews of any of the 16 Pixar/DisneyToons movies, according to the review aggregator Metacritic, and are five of the six worst rated according to Rotten Tomatoes.

And before you remind me about Frozen, let me clarify that I’m only talking about acquired properties. Frozen was a Disney production, so it doesn’t count for what I’m exploring here.

I have no idea if this drop in reviews – which is supposed to mean that Pixar movies haven’t been good under Disney’s management for the last three years – is because of something that Disney is doing (or not doing!) internally that’s messing with Pixar’s creative process. But when you have five critical flops in a row, that’s an indicator that something’s not right.

Meanwhile, Marvel movies are performing like gangbusters, and the most recent one, Guardians of the Galaxy, was incredibly well received. And Star Wars Rebels has gotten favorable reviews from both critics and fans alike.

During the “Spark of Rebellion” pilot premiere for Star Wars Rebels, the parallels between Ezra Bridger on Lothal and Aladdin in the marketplace are almost too blatant to ignore. In addition to being called a “Loth-rat,” he’s even referred to once as a “street rat” by an Imperial officer, exactly what the king’s guards called Aladdin. Both Aladdin and Ezra are pickpockets and thieves just trying to feed themselves, both of them scale walls and perform other acrobatic moves while trying to stay one step ahead of the law, and both of them start out crushing on very cute, out-of-their-league girls – Aladdin with Jasmine, Ezra with Sabine.

So that happened. And then the first Avengers trailer came out recently, for the Age of Ultron sequel. Which, incidentally, it came out seven months before the movie’s scheduled release in May 2015, so if you’re doing the math, there’s a chance that the first Episode VII trailer could be attached to it. But I digress. The Avengers trailer, if you haven’t seen it, uses a very mournful cover of the song “I’ve Got No Strings” from Pinocchio, and at the end of the trailer, Ultron’s signoff line is, “I’ve got no strings on me.”

I don’t know about you, but I just got kind of a little worried. In fact, what about you? Has your opinion changed about the Disney touch with Marvel and Star Wars? Let us know at Facebook.com/sw7x7.

Check out this amazing tidbit from Gary Kurtz, the original producer of Star Wars and Empire before he left the franchise. He said:

In the early story outline, Han Solo dies and the Rebel forces are left in tatters, with Luke disappearing into the wilderness. But George Lucas thought killing off main characters would hurt toy sales, so he changed the ending to a big Ewok party.

Wonder if that has any implications for Episode VII?

Today’s question: Whose training skills did Obi-Wan try to match, when he taught Anakin Skywalker?