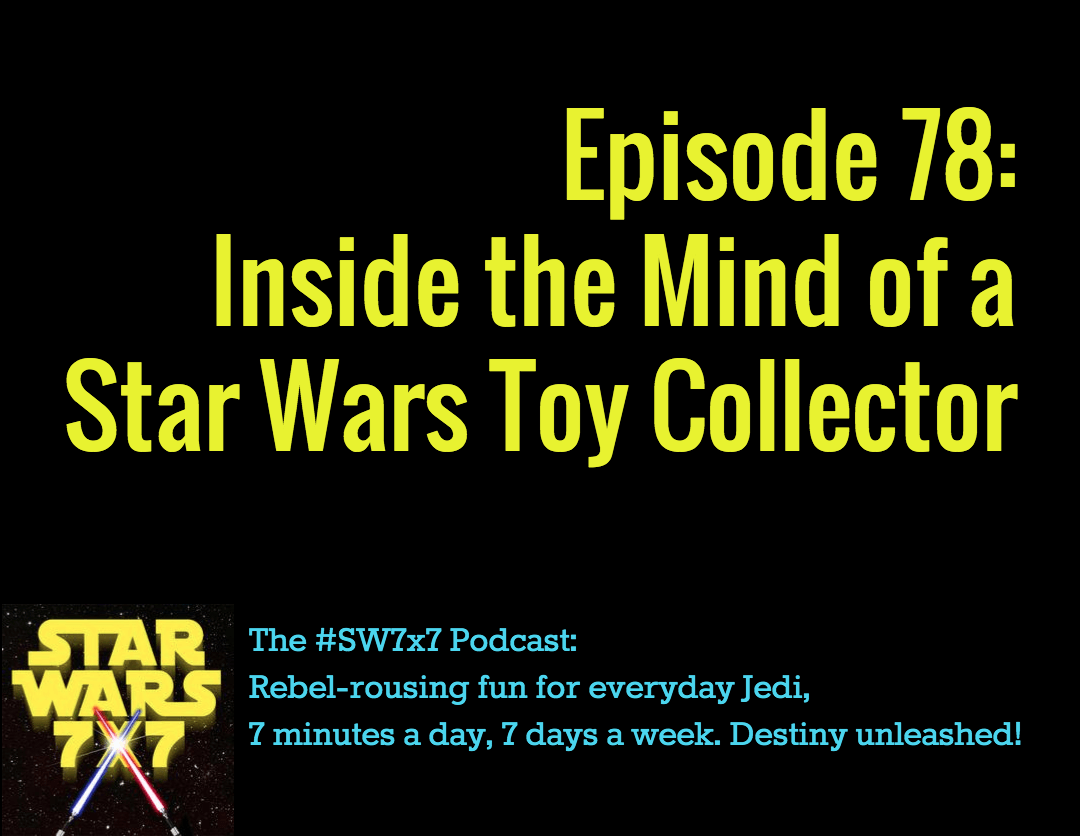 So here are the results of a totally unscientific survey: Likers of the official Star Wars Facebook Page, 12 million and counting. Likers of RebelScum.com’s Facebook Page, which claims to be the most popular site dedicated to Star Wars collecting news – I’m not doubting them, I’m just saying why I chose them for the comparison – anyway, 111,000 and counting.

So roughly, one out of a hundred fans of the Star Wars movies are the collectors. When you think about it like that, then the comments that Alex and Pete over at the Star Wars Minute podcast get about their listeners not wanting them to spend too much time talking about the toys, well, I guess it makes sense, because it’s potentially 99% of their listeners that don’t care about the toys.

But was it really always that way? Maybe you had the toys as a kid, but decided not to keep them, or didn’t get attached to them the way some others did. You probably knew kids who had them and played with them long after you thought that was cool, even though you still liked the movies and all that.

I bet a lot, a lot, a lot of people who had those toys as kids have kicked themselves many times over for not hanging on to them, or grilled their parents about why they got rid of the toys, or some such.

I think I stopped getting the toys around 1985 or so, when the toys and figures weren’t being released anymore. When they eventually came out with new figures – which, of course, were more articulated than the old figures, and were also more muscle-bound – I didn’t jump on that. I just got Han and Lando at 2 for $5 while I was at Granite Con last week, but they’re the buff ones, so they just don’t look right to me. The only thing I got was Princess Leia in her metal bikini, because it was Princess Leia in her metal bikini. In my tweens, I played with the toys less and less, and by high school, they were staying stacked in the closet, nothing even put out on display.

After college, when I finally got my own apartment, a ship or two would come out and sit on top of my TV cabinet. That was fun, because it wasn’t a toy anymore for me. Now it was just something Star-Wars-y I had, that showed how much I was into the movies and books and so forth.

Now, I haven’t talked to other Star Wars toy collectors very much, but I’ve talked to other collectors, of dolls, of cars, and various other pursuits. And a theme that seems to come across with a lot of collectors is some sort of loss. Loss of a parent at a young age for the child, particularly by death or divorce. That’s certainly true of me. My parents divorced when I was two, and I had no contact with my father growing up. I was young enough that I didn’t remember him, and don’t remember how badly I hurt that he was gone.

But there is a hole, and there always has been, and I’ve always known it. Just, not having the experience of a father, it was kind of impossible to understand what that would have been like to have one. So to not have it, well, it’s weird to want something when you don’t even understand what it is and what it means.

Would I say that collecting the toys filled the hole for me? Maybe so, but I think it was more about not wanting to lose anything else. I haven’t collected any toys for years, but I love to this day walking down the aisle in the store when the current toys are. I like being around them, but I don’t need them anymore, the way I used to just have to have them.

The clincher for me in realizing this was when I sold off most of my collection to pay for my wedding reception. That’s when I finally realized I didn’t care about the toys as much any more. They were a means to an end, and they had finally fulfilled their purpose.

But you can talk to me about them, and I’ll definitely stop and listen and talk with you. In fact, let’s talk about ’em over on Facebook!

R2-D2 Fit and Flare Dress – click the pic for details!

Today’s question: What did the stormtrooper at the Mos Eisley checkpoint demand to see from Luke?

Previous Post: 77: Why Do They Keep Coming Back to Tatooine?
Next Post: 79: A Grievous Waste of a General