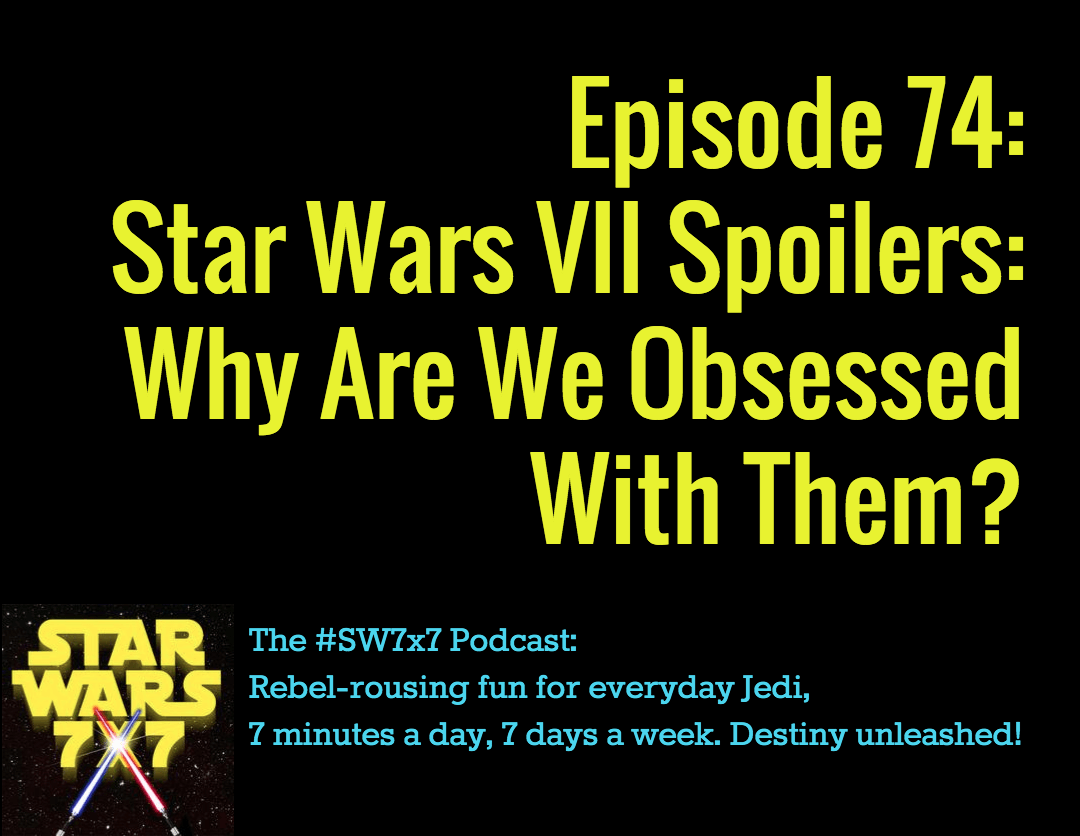 Force Feature: Star Wars VII Spoilers: Why Are We Obsessed With Them?

We’ve been doing the weekly updates on the progress of Star Wars Episode VII for about three or four weeks now, and there are two things that I’ve begun to notice in that span of time:

1. That the production team isn’t telling anyone a whole lot of anything. For example, there have only been four updates to the Star Wars: Episode VII category on the blog at StarWars.com in 2014, with the last one on July 6th. And so far, all we know from them is the cast, the time period of the film, and two filming locations (Pinewood Studios and Abu Dhabi). Plus, two videos and three cryptic photos from J.J. Abrams himself. And the inference that since the Expanded Universe is not canon anymore, that we can’t depend on any of that material informing the characters or plot of the new movie. Which, since Lucas provided the treatment for the whole trilogy, means it’s bound to be entirely different. So that’s the first thing.

2. News outlets and click-baiting entertainment websites are desperate for Star Wars news. They know what a hotly dedicated fan base the movies have, and they’re doing everything they can to cater to the thirst for information that Lucasfilm isn’t providing. Like, desperate to the point of recruiting spies, flying drones with cameras, and of course grilling any cast member at any public opportunity – even if they’re acting in support of someone else’s movie! At this rate, Lucasfilm really should consider doing what Brad Pitt and Angelina Jolie do, sell a bunch of photos exclusively to People or OK! or Us Weekly or The National Enquirer or whomever for $15 million, $20 million or more, and donate the money to the UNESCO Innovation Labs like they did with the whole Omaze campaign.

And why is everybody scrambling to get these scoops and sneaks and spoilers? Because we’re lapping it up. Maybe not you, perhaps, maybe you would prefer to live in a virtual cave until you can see Star Wars: Episode VII with complete newness and wonder.

Personally, I find myself torn about that. Left to my own devices – no pun intended – I would probably avoid as much of the rumors and spoilers as I could, and only check out the releases from official sources. But as I’ve been exploring the scuttlebutt sources for Episode VII news, I haven’t found myself put off yet. I haven’t hit a point of, “Well, it was okay to know A, B, and C, but I wish I hadn’t read about X, Y, or Z beforehand.” Not there yet. Besides, there’s enough conflicting information out there that you can’t really get a handle on the truth, anyway.

But why does anyone want the movie to be “spoiled,” per se? And let’s take it to a semi-logical conclusion. If you were someone who liked reading spoilers, would it be the ultimate to be handed a copy of the script for Episode VII, given a comfy chair and a beverage of your choice, and read it in full, a year before it comes out on the big screen?

I’m sure there are people out there who would say “YES!” and I think I’ve figured out why. Because for them, the notion of “spoiling” doesn’t exist. And even the most spoiler-averse around us can tap into that feeling, because if you’ve watched any Star Wars movie over and over again, you’ve already had it “spoiled.” And you’re watching it again, anyway, because you enjoy the story, you like the ride you get taken on, and you can still tap into that emotion even though you’ve been told the story over and over again.

If you have kids, you’ve probably experienced this with them at a very early age, when they asked you for the same bedtime reading over and over again. There’s a deep comfort in knowing the story before it’s told to you. There’s a part of us that likes surprises, too, of course, but you can’t always depend on surprises. Otherwise, they wouldn’t be surprises in the first place!

But I ultimately think that’s why there’s an ever more ferocious interest in spoilers in general these days – because we as humans, at least in the first world, are more in need of comfort than we’ve ever been before.

Here’s an unlikely site that’s come under fire for spoilers: Wikipedia! According to their article on spoilers, the spokesperson for the Wikimedia Foundation had to come out and make a statement about it, saying that “Wikipedia is intended to be an exhaustive knowledge source, so it would have spoilers.” If you think Wikipedia should come with a “Spoiler Alert!” warning, let us know at Facebook.com/sw7x7!

Today’s question: Who kept stormtroopers from opening the door to the Death Star’s chasm by blasting the door controls?