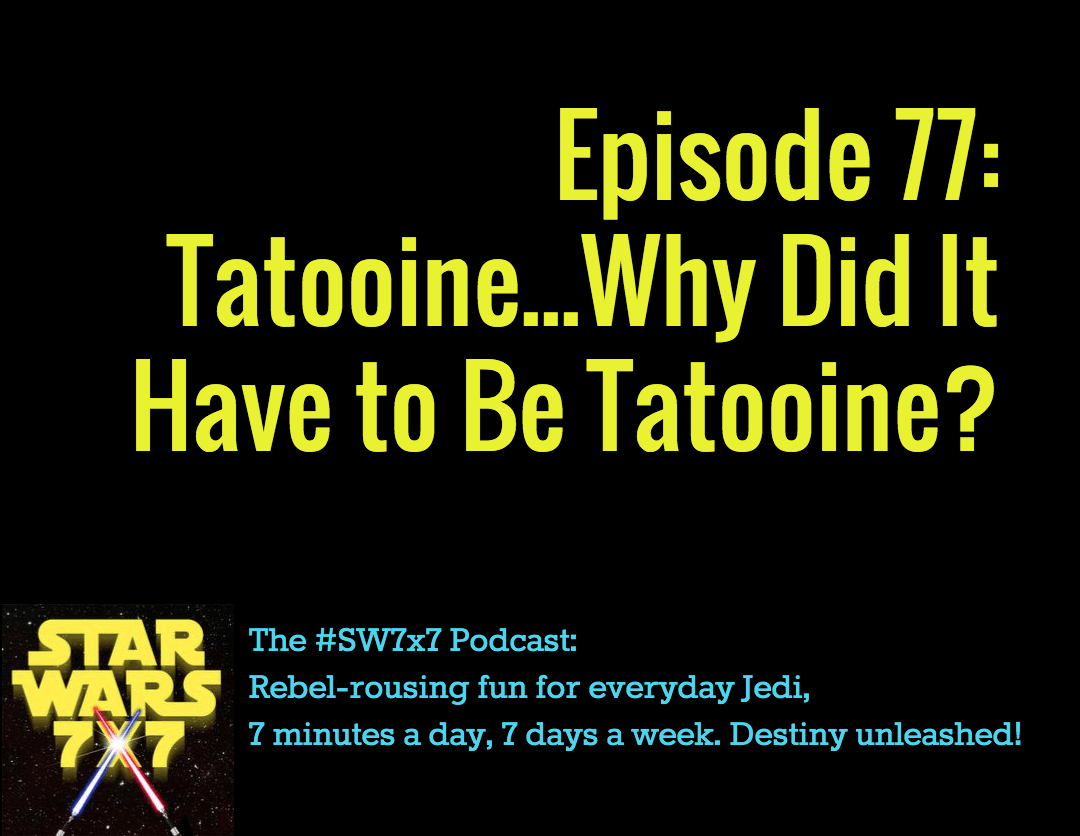 Tatooine is the planet that has appeared the most in all of the Star Wars movies – five out of six, and if you count the Clone Wars kick-off movie, six out of seven. And in the lone movie in which doesn’t appear, The Empire Strikes Back, it gets name-checked by Luke, with his “I’ll meet you at the rendezvous point on Tatooine.”

Incidentally, I’ve been pronouncing it Tat-ooine, the first syllable rhyming with “at,” all my life. Even when I heard Luke say “Tah-tooine,” like he was sticking out his tongue for a doctor, aaaaahhh, that somehow never got through to me. But I’ve decided to turn over a new leaf about this, because I have a firm opinion of how Han and Leia are pronounced.

I know some people say “Han” like it’s “hand” without the “d,” and “Lee-a” instead of “Lay-a,” but the right way to do it, I think, is to go with what they call themselves. When Han meets Luke and Ben in the cantina at Mos Eisley, he introduces himself as “Han Solo,” aaaahhh like the throat check. I think Lando was trying to say “Haaahn” at first while Chewie was choking him, but he couldn’t say it right because his windpipe was being crushed by a Wookiee.

And speaking of Empire, when Leia responds to Lando’s “And who might you be?” she says, “Lay-a,” not “Lee-a.” Which is also how Han says it to her earlier in the movie. That “Sure, Leia” line is one of the most underappreciated lines in the movie, cause he knows exactly what he’s doing, he can barely keep a straight face while he’s doing it, and he totally gets under her skin with it.

But back to Tah-tooine. One of the complaints about the prequel trilogies is that Lucas and company not only wasted the opportunity to go to a cool different planet, but also that it was ridiculous for Tatooine to keep popping up, as though it were the center of the universe. Which it is not, as Luke notes early on: “If there’s a bright center to the universe, you’re on the planet that it’s farthest from.”

Well, I guess it could have been any planet, but it certainly plays better to have it be remote and sparsely populated, doesn’t it? When you think about it, isn’t it always the kid out of nowhere becoming the star that taps into the fantasy we all have about our own lives? And it’s easier to identify the “out of nowhere” vibe by location, putting the hero on the outskirts of civilization. If Luke had grown up on Coruscant, he would have had to have been raised in the lower levels, far from the bright lights of success and power.

But I think there’s another way of looking at this, and it involves a heretical view – heretical, at least, as far as Original Trilogy fans go. Lucas says he wants everyone to watch the movies from one through six, because it’s Darth Vader’s story, and that’s the path it takes. Thus negating the best, most powerful, longest-ranging plot twist in the history of cinema, but never mind that for a moment!

When you look at it from one through six, Tatooine makes perfect sense. It’s fine that it’s where Anakin and Shmi wound up in slavery, because it had to happen somewhere. So it’s natural that Anakin has to come back to Tatooine to find his mother. And, not liking sand, or any of the memories of his life and times there, it makes sense that Tatooine’s the last place Anakin would think to look for his kids, if he’d even known they’d been born. Which he never asks about. He knew Padme was preggers, but he only asked Palpatine about Padme, not about the babies. So I guess Anakin assumed he’d killed them too.

Then Luke grows up on Tatooine, and again, this is that you’d expect from the situation. He gets off-world, and never looks back over his shoulder. And he only goes back to save his friend. So, looking at it from those angles, it all makes perfect sense. It had to be Tatooine, or nothing at all.

Fort Tusken (Wookieepedia)
Did you know? The Sand People got the nickname “Tusken Raiders” because they caused settlers from Bestine IV to abandon Fort Tusken by continually attacking the fort and destroying equipment the settlers needed to survive over a span of three years. Naughty Sand People!

Today’s question: What scaly reptiles did sandtroopers ride while on Tatooine?

Previous Post: 76: Cameo Madness, Where Will It End?
Next Post: 78: Inside the Mind of a Star Wars Toy Collector