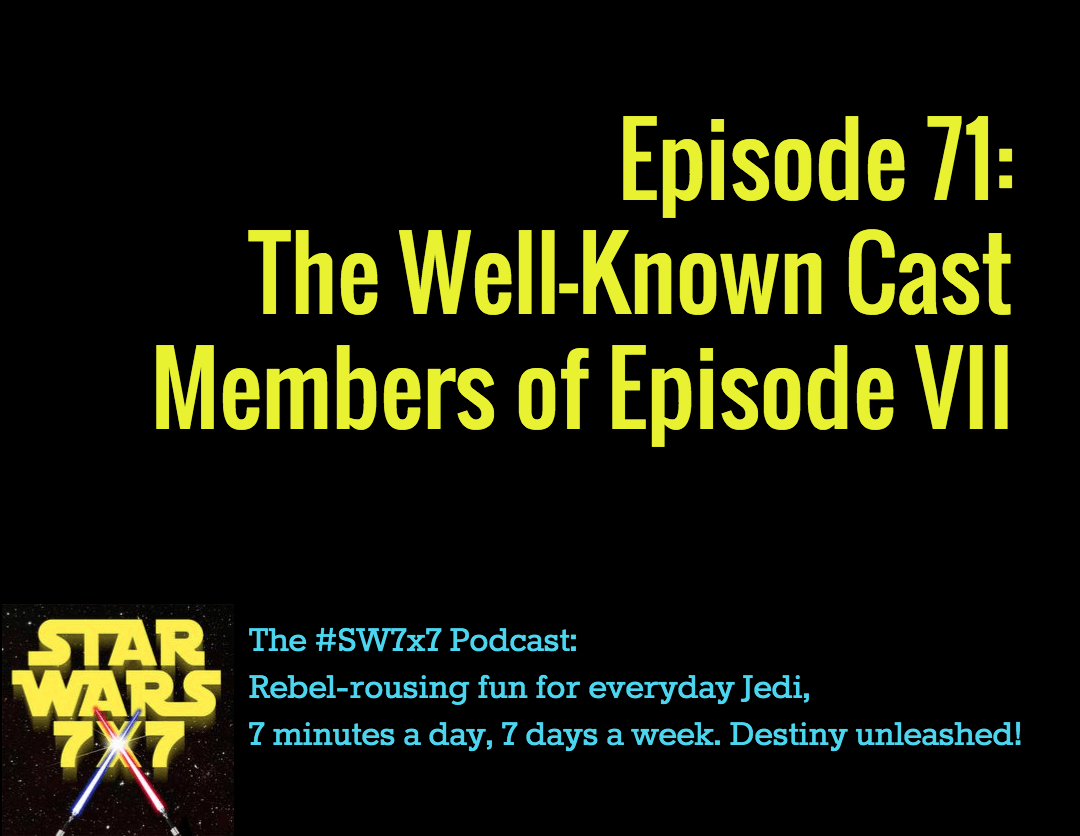 And now we come to part four of four, in checking out of the cast of Star Wars Episode VII. There are a few people we’re not going to bother with, including Pip Anderson, Christina Chong, Crystal Clarke, Greg Grunberg, and Miltos Yerolemou. Though I will say that Greg Grunberg has appeared in three different television shows created by J.J. Abrams – Felicity, Alias, and Lost. I think I recognize him best as the telepathic cop Matt Parkman from the TV show Heroes. In fact, if he has too major of a role, I think that might take me out of the movie a bit, you know?

But what do you think? Are there any actors in the cast that, if you see them, would take you out of the story? Let us know at Facebook.com/sw7x7!

I must say, I know Natalie Portman, Ewan McGregor, Liam Neeson, Christopher Lee, and Samuel L. Jackson from outside the Star Wars universe, but none of them really pulled me out of the movies. The one guy who did? Jimmy Smits. Because I was never really a fan of his, I’ll be honest with you, so when he showed up, I was like, “What the heck is he doing here? He doesn’t belong here!” 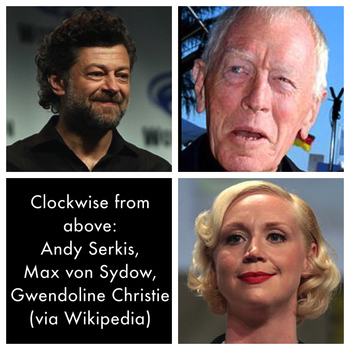 So the final three people we’re going to talk about, are the ones who have the highest potential to take me out of the story, and you’ll have to tell me if you feel the same way.

First off is Andy Serkis, and for those of you who don’t know him, he’s a master at playing CGI characters like Gollum in the Lord of the Rings movies, King Kong in, well King Kong, Caesar in Planet of the Apes, and so wait a minute. All the talk about Star Wars Episode VII has centered on how it will lean heavily on using practical effects as opposed to digital effects. But isn’t most of what Andy does, the kind of thing that you need digital effects for? Or do you think it could happen that he’s digital, but in a comparatively small role?

And we should note that Serkis doesn’t always get into the green body suit with the white balls stuck to them. He played Smeagol normal-like and did a great job at it. All I’m saying is, it’s possible. Moving on.

Now we have Max von Sydow, and you gotta tell me that when you heard his name announced for the cast, weren’t you dead positive that he was going to be this episode’s creepy old white villain? They already used the go-to with Christopher Lee, but Max von Sydow is about as perfect for the template as anyone gets. Of course, I’m saying this about the guy who played Jesus in The Greatest Story Ever Told, for Pete’s sake. So evil old villain is clearly not the summation of his career.

And speaking of not just doing evil old villains, he was also in Strange Brew, the Bob and Doug Mackenzie SCTV-spinoff movie, and Rush Hour 3 with Jackie Chan and Chris Tucker. This is a weird rabbit hole to go down, because I just found out that Roman Polanski is a fan of the Rush Hour movies as a result of the research for this. So let’s hope for comic relief from von Sydow!

Lastly, we have Gwendoline Christie, who in a sense belongs with the other actors we’ve profiled before, because she doesn’t have a laundry list of a resume to flaut. That said, she’s playing a bigger part in one of the hottest franchises of the day, Game of Thrones, and just got invited to yet another one, as Commander Lyme in The Hunger Games: Mockingjay 1 & 2. A couple months later, she gets tapped for Episode VII. That’s a good year!

Now, being that she fights with swords on Game of Thrones, it’s safe to assume that she’s going to be flaunting a lightsaber, right? It sure seems like a waste of her talent if that were to be the case. She’s playing a good guy on Game of Thrones, but I don’t think it would be a stretch for her to play for the bad guys. She’s definitely an intimidating presence, so who could she possibly play that’s someone major, and yet, isn’t standing in Carrie Fisher’s shadow? That’s why I’m guessing villain.

We’d love to hear your guesses, too – share them right now at Facebook.com/sw7x7!

Did you know? Three years ago today, they shut down “Star Wars Hyperspace,” the Official Star Wars Fan Club. Were you a member? What did you like best about it? Share your memories at Facebook.com/SW7x7!

How’s this for #mashupmondays? Caption it! #StarWars #Disney #SnowWhite pic.twitter.com/LCmu5uhy9H

Today’s question: What color was the milk served at Luke’s farm?

Previous Post: 70: The Not-So-New Faces of Episode VII
Next Post: 72: Lando Calrissian, Stickin’ It to the Man