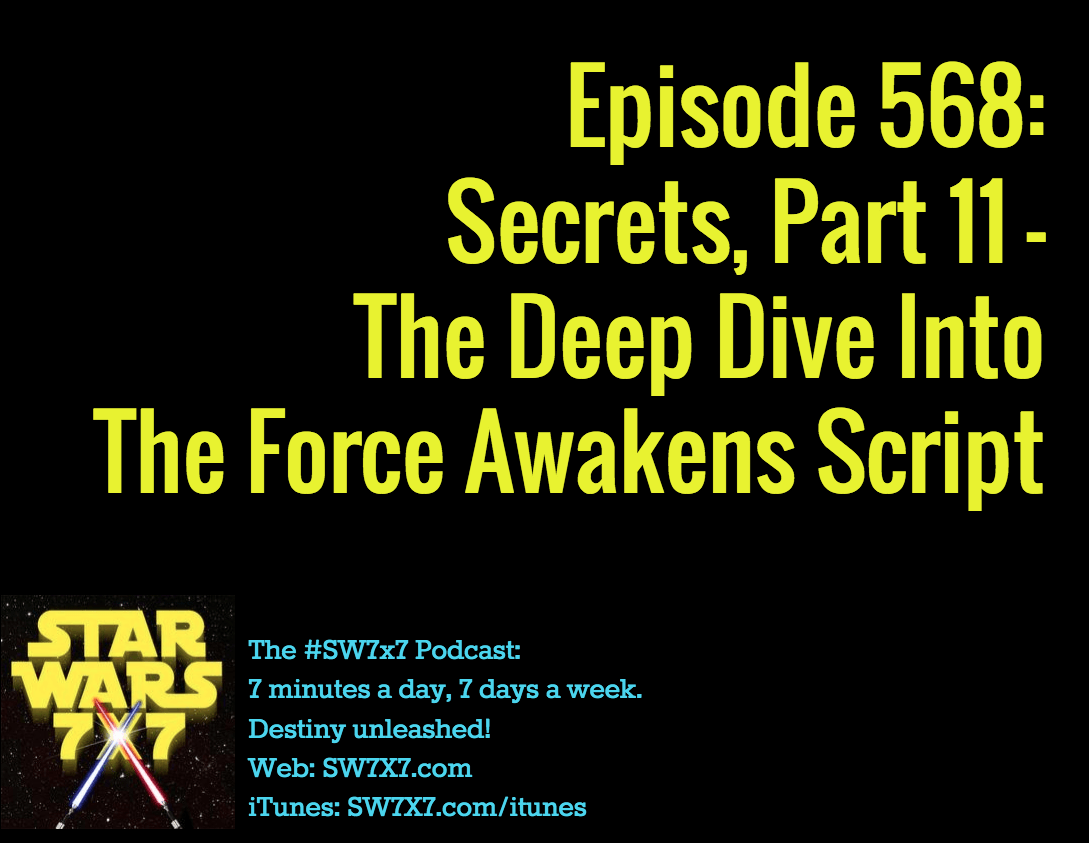 It’s a big day! On this dive into the shooting script for Star Wars: The Force Awakens, we finally get to the confrontation between Rey and Kylo Ren. And there are a couple of amazing tidbits in the script narrative. For a start, as Kylo starts to reach into her mind, we get this:

THEY’RE BOTH SURPRISED: they react to a feeling that passes between them — AN ENERGY THEY RECOGNIZE IN EACH OTHER.

So here, maybe this is the “Awakening” for Rey in the sense that this is the first time she sees it clearly, even if we all know it awoke when she was flying the Falcon on Jakku.

And then we get the confirmation of what she was able to do:

The FEROCITY of confrontation builds until it hits critical mass AND REY DOES THE UNTHINKABLE! SHE ENTERS HIS HEAD, AMAZED AT WHAT SHE IS SEEING!

That’s when she tells him about his fear of never living up to Darth Vader. Which makes him run screaming to Big Daddy Snoke in the scene immediately following. And for my money, this is the most intriguing line of the whole movie so far:

KYLO REN
She’s strong with the Force, untrained
but, stronger than she knows.

And while Ren’s mind no doubt goes to Luke:

SNOKE
And the droid?

Why in heavens name does Kylo Ren’s mind go to Luke in that very moment? I think this is a HUGE deal, one that could suggest not only did Kylo know Rey as a little girl, but also knows that the young Rey must have had some contact with Luke Skywalker, too.

Have a listen to the podcast, and share your thoughts in the comments!

Today’s question: What’s the FN number and/or trooper number of the Stormtrooper with the electrostaff mace who fought Finn outside Maz Kanata’s castle?